The RTA is considering slashing routes and bumping up the price to ride the bus and Rapid. This is coming at a time when ridership is up for the fifth consecutive year.

There may seem to be a disconnect here -- until you look at RTA's budget. Only about a fifth of the public transit agency's revenue comes from rider fares.

Rising gas costs have hit RTA the same as those who switched to the bus to run away from them. At the same time, state funding has gone down for the system. They're begging for people who care to write/call/whine to their elected representatives on a special site.

As I learned during my month of going car-free, RTA is a good enough service to get an everyday Clevelander around as it is now. Will it be after the service changes?
Posted by Andy Netzel at 8:53 AM No comments: 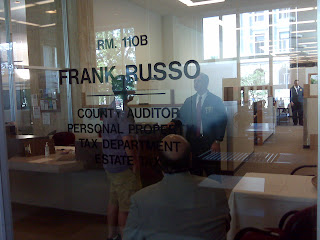 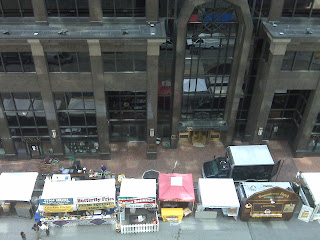 Some vendors are now up and running. Ingenuity officially starts in 9 minutes.

My aforementioned coffee break may now be a funnel cake break...
Posted by Andy Netzel at 3:51 PM No comments:

For the Love of the Tribe 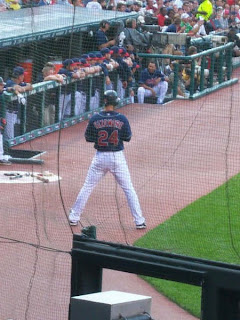 So what if the Indians are in last place? So what if I cried when they traded C.C.? When it comes down to it I still love the Indians — the excitment of seeing Grady Sizemore make a diving catch, the hot dog races, Casey Blake's beard. I will never be able to throw away my Kenny Lofton jersey or not turn on a game — no matter how bad it gets. With 24 home games left, the Tribe returns tonight to Progressive Field for the first time after the All-Star Break to take on the Minnesota Twins. Even if we aren't chasing the pennant this year, there's still plenty of questions left to answer: Can Grady keep hitting home runs to stay on top of the AL league leaders? Will Victor and Pronk ever return? Will Cliff Lee have a second half just as impressive as the first? I don't know about you, but I will be watching.
Posted by Kim Schneider at 1:07 PM No comments: 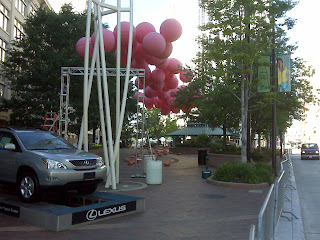 The Ingenuity Festival starts today at Playhouse Square. Last year was a mess with the Euclid Corridor Transportation Project bringing torn-up streets and orange barrels. This year...well, it's still a little bit of a mess. But less so. Here's a photo from a few minutes ago. Since the Cleveland Magazine World Headquarters is 20 feet from the Ingenuity Fest, I'll keep an eye on any major updates during my coffee breaks.
Posted by Andy Netzel at 9:23 AM No comments: Cleveland, Jul 24, 2008
Originally uploaded by firewater9898
We love Great Lakes Brewing Co's beer as much as the next guy. Maybe even more. Heck, we've toured the underground tunnels, started marking the days until Christmas Ale hits store shelves (in case you're interested, we're at 102 and counting), paid homage to its attempt to make science cool (everything goes better with beer) and even bestowed several Silver Spoon Awards upon its frothy head. But we've got nothing on this guy. ... We're just hoping someone called him a cab.
Posted by Cleveland Magazine at 10:28 PM 1 comment: 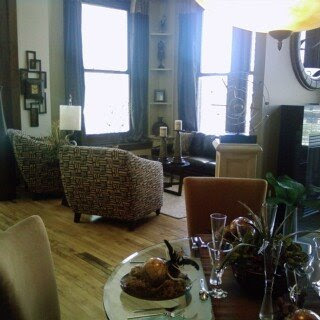 Come this November Public Square will have more people milling around town thanks to the Park Building. This historic nine-story landmark is currently being converted into luxury condos with great views of downtown. Refinished hardwood floors, granite kitchen countertops and dark oak molding and trim are standard with each unit. But if you’d like something specific, don’t be afraid to ask. One of the soon-to-be-new tenants purchased two condos and is combining them to include a library and walk-in closet. Also, a 10th floor is being added to allow for two-story penthouse suites that will have bedrooms overlooking the kitchen and living areas. Of course, you’re wondering how much a place like this will cost: One- and two-bedroom suites start at $100,000, while three-bedroom suites start at $300,000. With the rising cost of gas, its looks like a good deal, especially when you can go down the street to grab a bite at Lola or head out to West Sixth for a night out on the town — and of course, walk to work.
Posted by Kim Schneider at 3:57 PM No comments:

Quinn has adopted the perfect attitude about handling his plight as Anderson's backup. He doesn't mope about it, but he doesn't insult anyone's intelligence by denying it hurts.

That honest attitude is refreshing. Athletes tend to follow a script when answering questions. Listen to the occasional extended interview on WKNR, and you can probably guess the quote coming out of just about any athlete's mouth within a word or two.

That's why I like Quinn. Check out our cover story on him and his buddy, Pro Bowl lineman Joe Thomas, from our January issue. You'll see some of the same candor.
Posted by Andy Netzel at 3:25 PM No comments: Cosmic Cleveland
Originally uploaded by teacherholly
We're always looking for ways to see our city in a new light — but we never expected this. Can you find Key Tower in this photo? Be sure to check out Holly's "trip" to Cleveland shot too.
Posted by Cleveland Magazine at 2:50 PM No comments:

The county wants to build a new Cleveland convention center, and the big questions are: where? and how much will it cost? This week's news is that the project will be pricier than advertised. It's no surprise. You could see the leading sites' expensive problems two months ago, at a May 22 public forum.

A vice-president for Forest City showed off rough designs for its proposal near Tower City. Its big problem is truck traffic. To ship in all the stuff for a convention, trucks would have to cross a long new elevated driveway, extending from the Eagle Avenue Bridge (by Progressive Field) to the new convention center. The design had trucks docking one story above the center's main entrance on Huron. It looked ugly and awkward.

The other leading site is the current convention center's location. Some engineers presented attractive designs for a new center there, underground like the current one, with skylights and suspension-bridge-like roof supports. It looked good, but it meant digging several feet deeper, which would run up the cost.

Now comes the news that both sites would cost more than the $400 million the county's sales tax hike will raise. The county commissioners insist they won't spend more, and private contributions will have to pay for the rest. Forest City is trying to shave costs -- it's redesigned its site to be shorter. Engineering consultants are reportedly looking for savings at the city-owned site.

Forest City is trying to fit a big center on not much land, so its proposal is too thin and vertical. The city-owned site has to be underground, unless the county wants to trash Daniel Burnham's century-old "Group Plan," the master design for downtown. That's why the costs are high. But the county won't move to another site. The others being bounced around are too small or too far from the center of town.
Posted by Erick Trickey at 2:31 PM No comments: 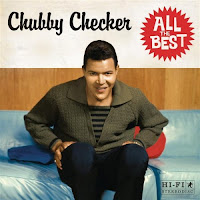 Seven years ago, Chubby Checker said there should be a statue of him outside the Rock and Roll Hall of Fame and Museum. So far, he has yet to be enshrined within the Rock Hall, let alone immortalized outside of it. The sarcastic among us may call tonight's event further campaigning, but Checker is calling it a CD signing and concert. The concert is free, the CD isn't. Check out his appearance today on Channel 3's morning show where the man who brought the world The Twist worked product mentions for Fred Baker Porsche, his Painesville-produced beef jerky and his most recent CD into a 2-minute spot. Hey, the man is a pro. (Rock Hall, 6:30 p.m.)
Posted by Jim Vickers at 11:44 AM No comments: