I celebrated the arrival of Wine Spot on Lee Road in Cleveland Heights with a 2012 post. A recent visit made it clear that much has happened since then and there are many more reasons to put this place on your go-to list.

There's still the same eclectic array of wines, craft beers, and hard ciders from around the world for sale. But now there are 12 beer taps and a six seat bar; an extensive selection of hard to find vermouths, digestifs and apertifs; cheese and meat boards to go with your drinks- charcuterie supplied by Saucisson; and a high speed chiller that can get a bottle ice cold in seven minutes.
Owners Adam and Susan Fleischer also secured a full liquor license and so they are pouring shots — only the really good stuff of course — and mixing some creative cocktails along with full glasses of everything they sell. Those in a tasting mood can order beer, wine or whiskey flights.
Since New Year's eve is almost here. it's worth mentioning that the store is stocked with a variety of bubbles-champagne, cava and prosecco among them. But I am totally smitten with something Adam encouraged me to try. It's a dry sparkling white wine called Gruet Brut, made in the French methode champenoise. Not sure which feature amazes me more: how delicious and aromatic it is, with notes of grapefruit and green apple; that it's only $14.99 a bottle; or that it comes from New Mexico. Finds and recommendations like this are what The Wine Spot is all about. And I'm so glad to have them in my neighborhood.

Posted by Laura Taxel at 6:30 AM No comments: 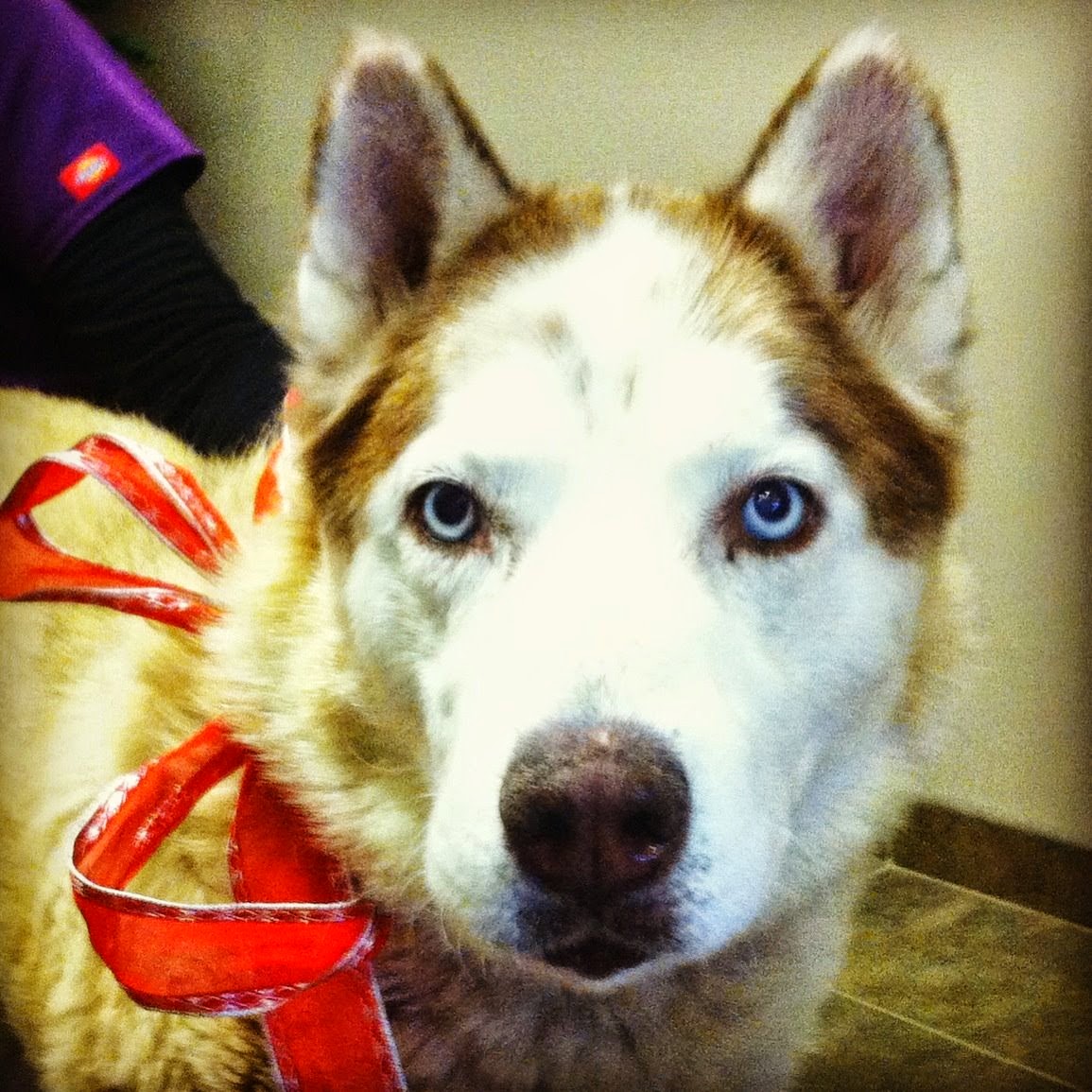 What Michelle Heinz, a law student with some big vet bills, is doing has so many different kinds of good going on that I hardly know where to start talking about it. Her Chardon based side business is called  Wasted! Bakery. She makes healthy treats for dogs, horses and humans.   The project started when she needed extra money to take care of her rescue dog Diego. Now she supports multiple animals (as well as herself). She uses spent grains from local brewers and distillers as her base ingredient, stuff that would normally end up as trash. But for her, it's pure gold.
"It's really healthy," Michelle explains to me. "The process of producing alcohol releases the sugars in the grains and replaces them with protein molecules." 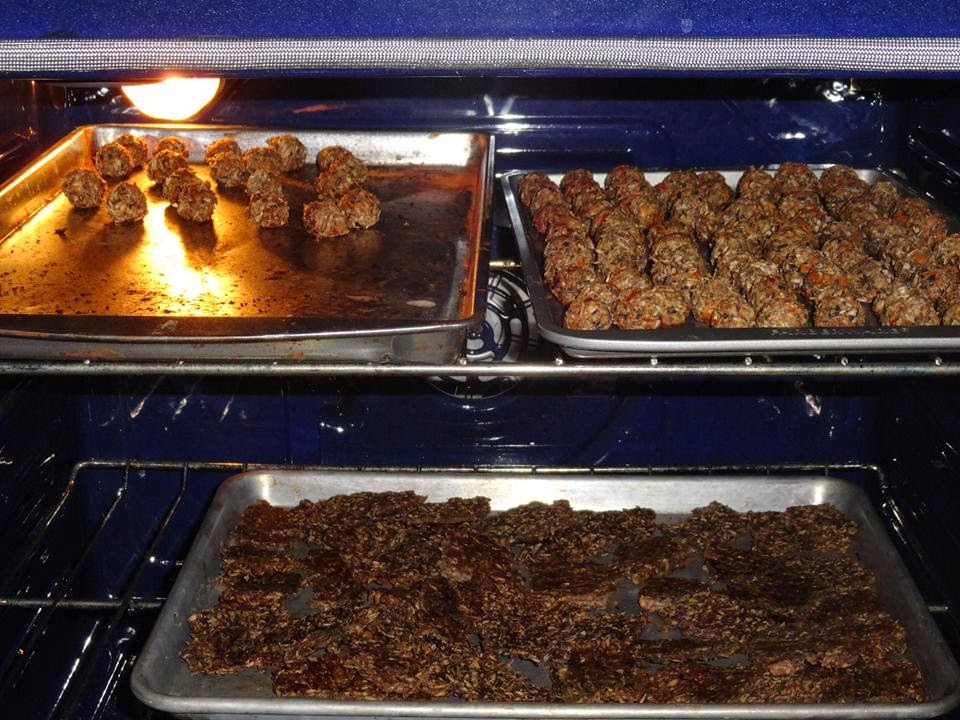 The puppies get combos like pumpkin and parsley or sweet potato and basil; for the ponies it's molasses clusters and applesauce bark. People can indulge in bourbon browns and peanut butter cookies. Her four footed pets, boyfriend and family are willing taste testers.
Eventually she hopes to have her own store. But for now, catch her and Wasted! Bakery's wares at The Taste of Chardon on Jan 31.  Everything can also be ordered any time by email or phone. 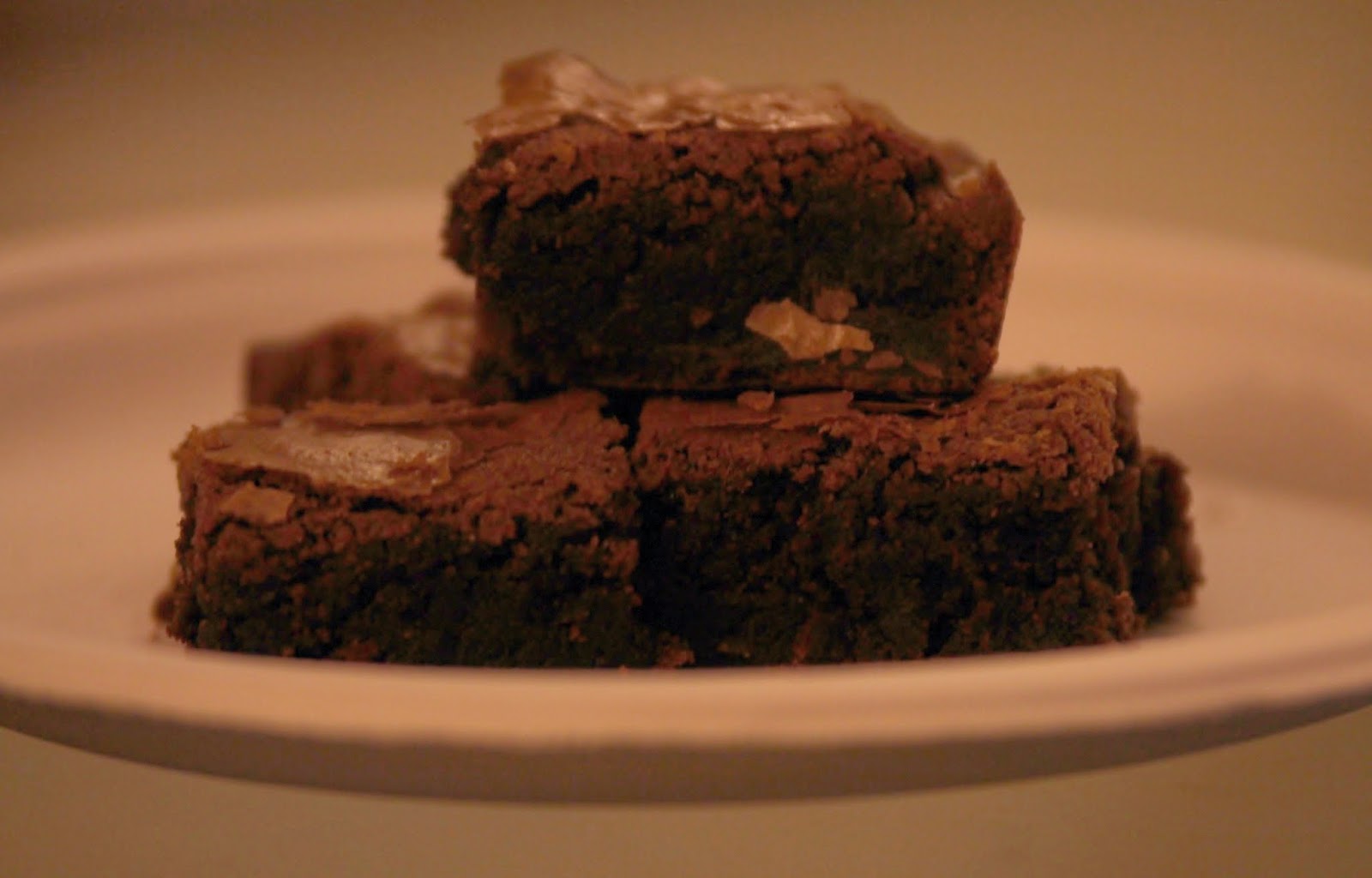 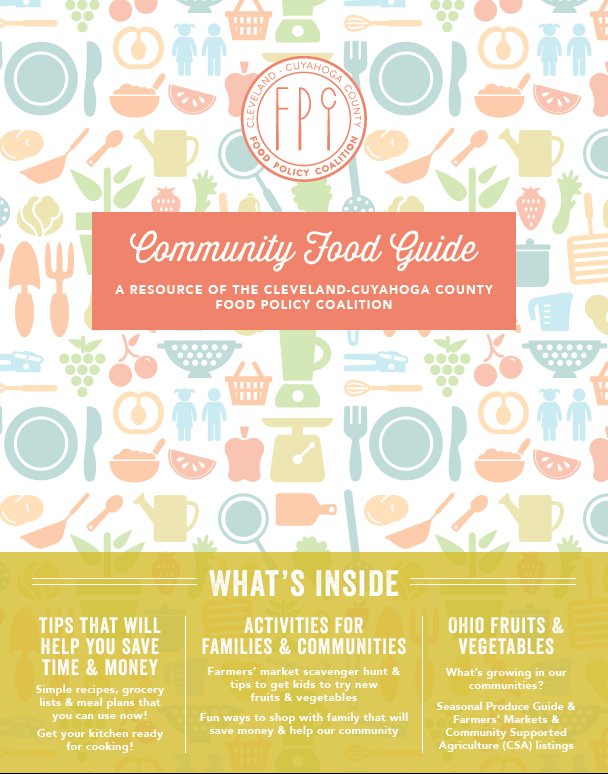 The Cleveland-Cuyahoga County Food Policy Coalition, an organization dedicated to creating a fair, healthy and sustainable local food system accessible to all area residents, has put together an easy to use 18 page guide to help people plan nutritious meals on a budget, stock their pantries, shop smarter, learn a few cooking basics, and utilize fresh produce. With short sections of text and lots of colorful graphics, the authors- a group of contributors from various educational and medical institutions, government offices and community service providers- deliver a lot of important facts in a very digestible format. There are tips about how to get the best deals at the grocery store, start a vegetable garden, an explanation of how CSA's work along with a list of 13 of them, and details about financial food assistance options.

Well informed foodies and more experienced cooks will likely not find much that's new here. Though the countywide directory of farmers' markets, which includes locations, phone numbers, months of operation and hours is a keeper, to be pulled out in spring when they resume operation.  If you don't need this kind of information think of others who do. Maybe this is something you want to share with neighbors, workplace colleagues or employees. I also suggest passing it along to young adults you know- your own kids, relatives and friends- who are just beginning to live on their own: there's an entire page devoted to essential kitchen tools, divided into"buy now" and "buy later" categories. In fact, since we're in the gift giving season consider a package that includes the Guide along with a cast iron skillet,  a wooden cutting board, or a Dutch Oven.

The Community Food Guide can be downloaded as a pdf. Single printed copies for individuals or multiples for anyone interested in distributing them can be requested by emailing Nico Boyd,  boyd.406@osu.edu, or calling him at 216-429-8200, ext 212. A Spanish language version will be available in the next few weeks.
Posted by Laura Taxel at 6:30 AM 1 comment: 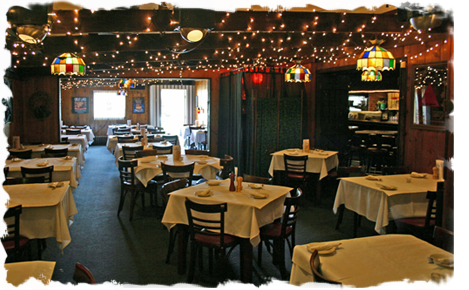 Grovewood Tavern, open since 1999, occupies the sweet spot between fine dining and neighborhood hangout. The place is a Collinwood fixture that has won a loyal following and its fair share of awards. But that doesn't mean they're averse to change. After months of planning, Chef John Bausone, who's been on the job about 18 months, six of them as executive chef, launched a new dinner menu on Friday, December 5th.

The native Clevelander has breathed life and invention into the comfort food line-up by drawing on the city's ethnic traditions,  his classic French training at Robert Reynolds' Chef Studio in Portland Oregon,  his time down South at The Biltmore in Asheville North Carolina, and an enthusiasm for all things Italian. And he's doing it using mostly Ohio sourced ingredients. 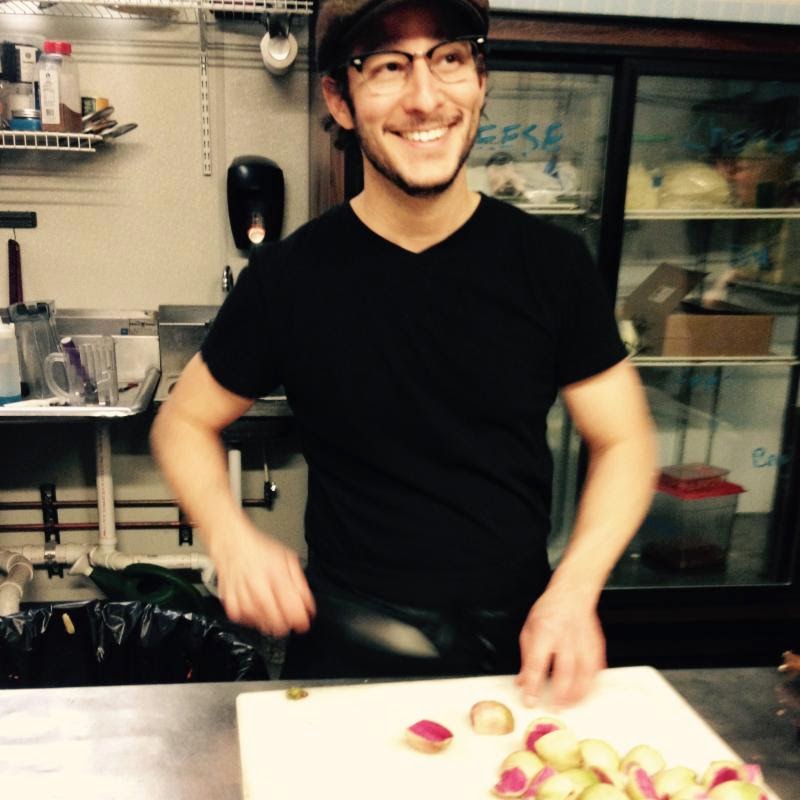 Bausone tells me he's especially proud of the buttermilk fried chicken and greens that comes with biscuits and chile infused honey. The smoked bison brisket is one of his personal favorites. And he's very happy with the vegan stuffed cabbage. "The rolls are filled with rye berries, root vegetables and chestnuts that together have the mouthfeel of meat," he explains. "The spicing for the the tomato sauce is Middle Eastern and of course I plate it with potato puree. The dish is very satisfying, even for meat eaters."

I was at Grovewood last week eating off the old menu.  And I'm eager to get back and try all this. The Red Envelope I was given provides additional motivation to return in January. There's a "mystery" coupon inside worth $10, $25, $35, $50 or $70 off the bill. To take advantage of the promotion, now in its sixth year, I have to dine there next month. I won't know how much of a discount I get until it's time to pay the bill: rules require that I hand the server a sealed envelope. Go there in December and you can get your own Red Envelope (while supplies last) along with some of Chef Bausone's intriguing culinary creations.
Posted by Laura Taxel at 6:30 AM No comments: 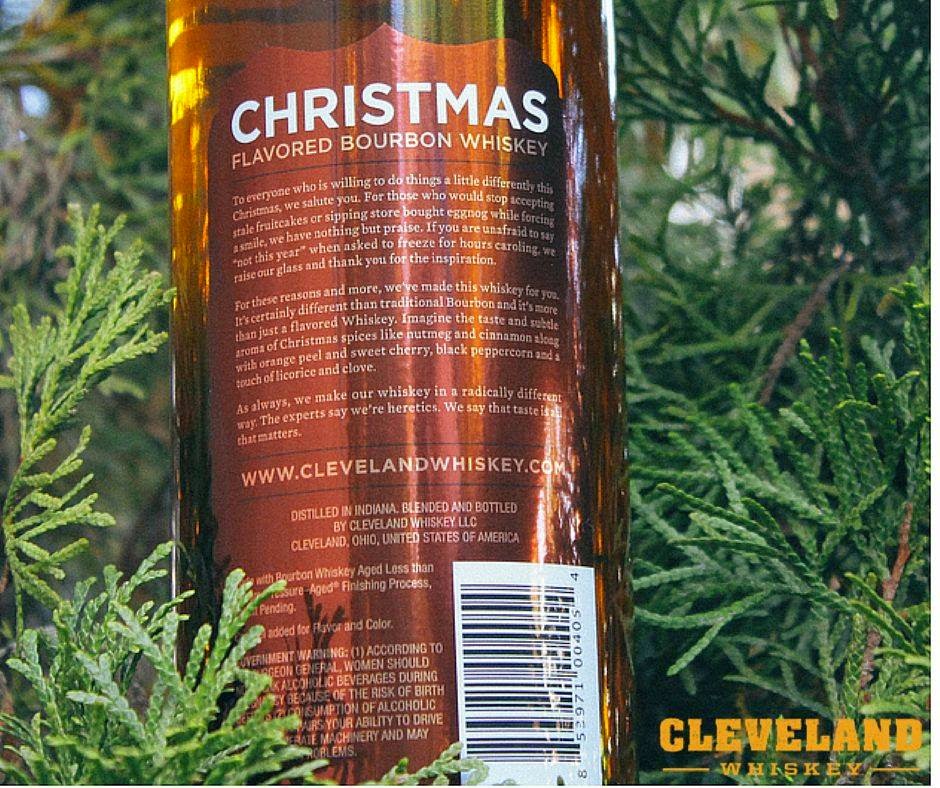 Cleveland Whiskey, a locally bottled spirit that get's age on it in a super fast, ultra-secret process that I wrote about last February, has its fans and its critics. Fortune came in on the enthusiastic side including the distillery's Christmas Bourbon in the magazine's list of 11gifts for alcohol drinkers for 2014. If you don't have an opinion yet, try it for yourself Saturday, December 6 at Cleveland Whiskey's Holiday Open House, from noon to 6 PM. 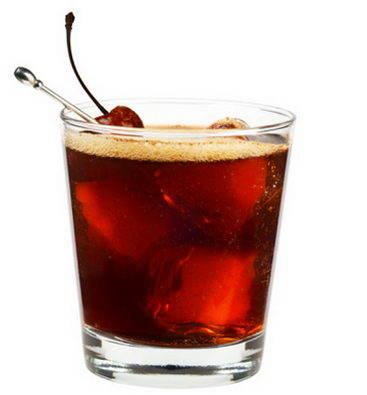 It's an opportunity to sample (and buy) all three versions of their product and cocktails made with them, and indulge in bourbon infused goodies: chocolates from Fear's Confections; ice cream from Mason's Creamery; cupcakes made by A Cupcake a Day; and brownies from Wasted! Bakery. The Nosh Box Food Truck will be stationed outside from 1-4 PM, offering sandwiches and tater tots with an optional splash of Bent Bourbon Sauce made with Cleveland Whiskey.

There will be a free-to-enter raffle, gifts for purchases of $100 and $120 (while supplies last ), and a complimentary pulled pork slider from the truck for those who pony up for a bottle of Cleveland Christmas Bourbon or Black Reserve Bourbon.