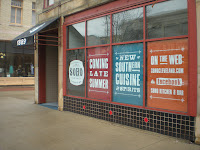 Chefs Nolan Konkoski and Eric Williams have come up with a cool and clever twist on the pop up restaurant idea. For one night, on Aug. 22, Momocho, Williams’ Ohio City place, becomes SoHo Kitchen, Konkoski’s new spot a few blocks away on West 25th Street that’s due to open in mid-September. To pull off this bit of culinary theater, they’re changing everything from the sign out front to the printed menus and the food on the plate.

The two guys have some history: Konkoski worked at Momocho for six years. In fact, he helped open it. Williams, excited to help out a friend, colleague, and soon-to-be neighbor, told me “this is going to be a fun fantastic blow-it-out-of-the-water event with lots of surprises.” 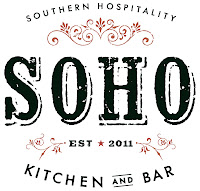 Meant to spark some buzz about the restaurant to come, this reservations-only teaser meal offers a preview of the Southern-inspired, modern accented fare Konkoski and his partner (in life and business) Molly Smith plan to serve, along with some of the cocktails and beers that will be on their list. There will be a three-four selections in each category: appetizers, entrees, desserts, and drinks. Prices will range from $8 to $18 per item. Given the name, an acronym for SOuthern HOspitality, I expect they'll also be dishing out a warm friendly welcome, too.

There are only 100 seats available throughout the night from 6-9 p.m. To be sure you get in on the shrimp and grits and guarantee your portion of chicken and waffles, better grab the phone and call 216-694-2122 right now.
Posted by Laura Taxel at 6:00 AM

Soho? The unique Soho that I know it's the magazine or this is a restaurant? However thanks for share nice things like this.

Cleveland magazine it;s one of the best magazines I've ever known. Thanks for make this wonderful post to all the community.

Nice post I like your site very well and I continue visit on this site for more information.

Hi,
This type of cloth is the one every pregnant women need, somrthing that makes her look anazing and adorably pregnant...
Excellent suggestions.