Interactivity meets art and technology at this year's Ingenuity Fest 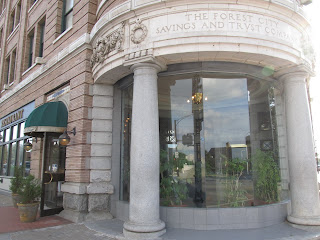 Through the doorway with the green awning and down a flight of steps lay a festival of sights and sounds spanning the lower level of one of Cleveland's historic bridges.
Just about a hundred feet above the river, Cleveland’s past, present and future were all on display at the 2011 Ingenuity Fest this weekend. The annual event, set up for the second year in a row on the lower, streetcar level of the Detroit-Superior Bridge, was a giant art exhibit — of sorts. 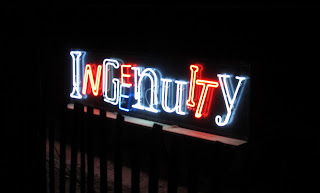 Paramount at this exhibit was interactivity. Consider the Doodle Bar by the YoyoSyndicate, a sub-group of Dr. Sketchy Cleveland. 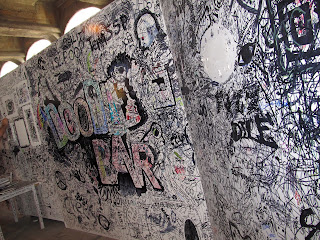 The Doodle Bar let Ingenuity Fest-goers write whatever their hearts desired on several white walls, desks and chairs. By late Sunday afternoon, people were seen lugging around scribbled-on pieces of furniture as souvenirs.
As in the past, technology was prevalent at Ingenuity. Every installation had a QR code that could be scanned with a smartphone. The code sent users to a website containing more information on the installation or artist.
At the middle of the span, the phrase "tweets light hearts" could be seen written in chalk on the concrete poles supporting the bridge. An interactive installation, comprised of a series of hearts (similar to those in a video game), lit up progressively over the weekend as more and more people tweeted using the #ingenuityfest hashtag. 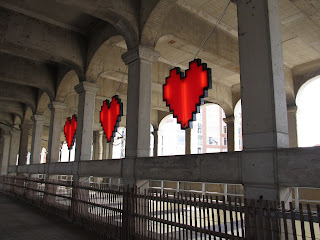 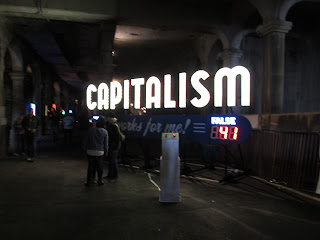 Viewers could walk up to a podium and press "True" or "False" buttons to vote on whether they agreed with the sign's sentiment. A side effect (or probably the intended effect) was the conversation that often arose after someone cast a vote. At one point in the afternoon, capitalism was leading the race, but only by a slight margin.
Posted by Jason Brill at 5:55 PM

I really love your information,I Felt so happy when I read your info, thanks for sharing bye bye excellent post !