Showtime for A Chef and A Restaurateur

Hodges, the new Euclid Avenue restaurant from food trucker Chris Hodgson and serial restaurateur Scott Kuhn, officially joined Cleveland’s downtown dining scene at the end of March. I got the grand tour last week and sat down with Chef Chris over lunch to talk about what he’s doing and plans for other projects he and Kuhn have in the works. 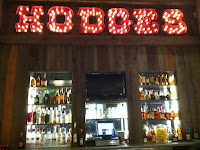 My walk-through starts in the bar at the front of the narrow space, inside the ground floor lobby of this office and apartment building. The name’s up in lights like a theater marquee, suggesting diners are in for a show. And indeed those who grab one of the hi-tops or a stool at the long counter have a view into the kitchen and can watch plate after plate of eye-catching food come over the pass. Beyond this area are two dining rooms, plus another upstairs on a balcony that looks out over the action below. A separate space is available for private events and multi-course chef’s whim dinners, served family style.

The décor is a quirky mix of country chic and city sleek: weathered wood paneling, old barn doors, and canning jars on a shelf paired with cushy candy apple red upholstery on chairs and the banquette, metal tables, and factory floor lighting fixtures. The patio, due to open April 30th-temperature permitting- will add 100 more seats (to the 124 inside). It’s a pretty spot, set out of of sight and far from the street, with its own bar.

Chris describes his menu as global comfort food but what I saw was heavy on American favorites- sandwiches, turkey club, ribs, mac-n-cheese, burgers, pork chops, steaks and salmon. All however incorporate something out of the ordinary: exotic spicing; an unusual condiment like onion bacon jam; sides of lobster whipped potatoes and creamed heirloom beans; or meats smoked in-house. There are some intriguing surprises- a lard spread sweetened with local honey among the snacks; an appetizer of mussels and Korean sausage in a coconut curry; and duck breast with black barley “risotto.” A few items reflect the whimsical riffs he’s known for. The PBLT (braised pork, bacon, siracha aioli, lettuce and tomato) reprises a Dim and Den Sum favorite. Another dish that shows the chef’s playful nature is “pork & beans,” with braised bacon and pressure cooked pine nuts standing in for the usual ingredients to delicious effect. I also tasted a wonderful creamy goat cheese and leek tart, made with chevre from Mackenzie Creamery; airy ricotta gnudi topped with crisped artichoke hearts in a silky Parmesan lemon sauce; and ravioli in a French onion soup reduction, an interesting concept but unfortunately it had a burnt taste, as though this batch had spent too long in the pot and over the flame. 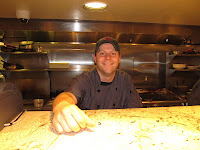 For now Hodgson’s running the kitchen- but that’s a temporary role for him. (The opening executive chef left and they’re in process of hiring a replacement.) He and his partner have an ambitious agenda and never saw Hodges as a one-off chef-driven restaurant. They intend to develop multiple properties and have already signed a letter of intent to lease space for another eatery in Chagrin Falls. Their company, Driftwood, is the umbrella organization for a variety of ventures that also includes a catering arm and operation of the food trucks that launched Chris’ career. So if you want to catch some face time with this personable young chef, better get yourself to Hodges soon before he moves on to whatever’s next for this dynamic, entrepreneurial duo.
Posted by Laura Taxel at 6:00 AM

Isn't it Dim and DEN Sum? Not DeM? www.dimanddensum.com/