A Sighting of the Devil 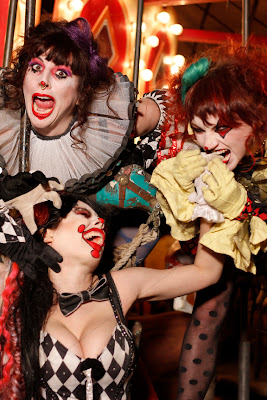 The Devil’s Carnival, a dark musical, is not a passive, comfortable film-going experience, but with Darren Bousman (Saw II, Saw III, Saw IV) as director, that's expected. Tonight at 10:30, Bousman joins guests in Gothic and clown-like attire and makeup at the Capitol Theatre for the Cleveland premiere of his latest film.

“It’s like Tales from the Crypt meets anti-Glee,” Bousman says.

In the tradition of The Rocky Horror Picture Show, guests are encouraged to take part in the show, dance in the aisles and sing with the music. Costume contests and prizes also take place throughout the night.

“It’s a rowdy group, but it embraces everyone,” Bousman says. “From the freaks, to the high school cheerleaders, to the nerds: the music speaks to everyone.”

Audience members will participate in a two-hour show that features an opening act of burlesque dancers, performance artists and clowns, never before seen footage of REPO! The Genetic Opera (a horror-rock opera directed and produced by Bousman), the 60-minute Devil’s Carnival and a Q-and-A with Bousman and lead actor Terrance Zdunich.

The Devil’s Carnival is based on a modern retelling of Aesop’s Fables.

Episode one is the focus of the tour. It takes place in hell and is based on the sins gullibility, greed and grief. Episode two, which is currently being written, will take place in heaven.

Bousman said he expects The Devil’s Carnival to turn into a television show, though that wasn’t the point of the project.

“Repo! The Genetic Opera wasn’t a success, but it started a following of people who wanted to see more,” Bousman said. “It became a cult hit based on interaction, which inspired the creation of The Devil’s Carnival.”

Unlike the Saw series, this project belongs primarily to Bousman. Millions of dollars were spent on Saw billboards, posters and trailers. The Devil’s Carnival, with a smaller publicity budget, is lucky to get a couple write-ups per event.

“With this, I control everything,” Bousman says. “If I fail, I fall very far.”

The tour, which has done 25 screenings in 27 days so far, is scheduled to end August 18, but Bousman said the shows will continue as long as people keep showing interest.
Posted by Rachel Hagenbaugh at 2:21 PM