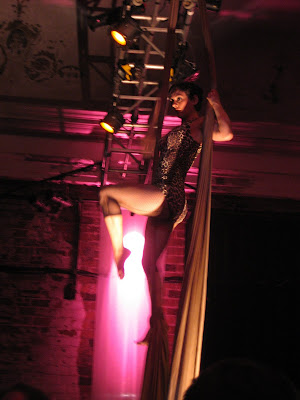 My date had never been to Pandemonium, but she knew it by reputation. "It's one of the best parties in Cleveland!" she said -- then admitted she let out a little cheer at her desk at work when I e-mailed to say we were going.

She's right -- and the 2009 version of Cleveland Public Theater's fundraiser on Saturday exceeded even my memory of the event from a few years ago.
A stage full of actors introduced this year's theme, "Forbidden Knowledge," by peeling duct tape from their mouths, slipping heavy headphones from their ears, and shouting out their forbidden thoughts, which ranged from Marquis de Sade quotes to a fervent defense of Judy Blume's Are You There, God? It's Me, Margaret (from a guy!). As the scene broke up, a woman in a Mardi Gras mask appeared next to me and asked me my secret. I demurred and asked hers. She whispered it so quietly, no one around us heard. (I shall not post the secret here.)
Short plays broke out all across the CPT campus: in an alley, an upstairs attic-like space, the Parish Hall and Orthodox buildings near the main theater, and on the lawn between them. I expect a mix of successes and disappointments from a crowded schedule of performances, but the quality was consistently high. From a fortune-teller who proves that human life is both predictable and mysterious to a happy, happy woman singing an ode to the anti-depressant Cymbalta to a teacher keeping a secret at a high school reunion, the plays were almost all funny and spirit-lifting. Readers perched in Parish Hall's second-floor window declaimed from banned books for the party-goers below. (The transition from D.H. Lawrence's Lady Chatterley's Lover to William S. Burroughs' Naked Lunch was a bit jarring.) Across the lawn, Vodka and Scotch, a Ukrainian and Scottish folk music duo, played fierce acoustic music from a story-tall platform, beckoning guests back toward the main theater.
After the Pan Award was given to Brian E. Hall -- by Mayor Frank Jackson, among others -- came a "helium aerial dance," or "solo silk act." To Leonard Cohen's "I'm Your Man," Lisa Natoli performed sultry acrobatics on long green sashes hanging from the light beams (pictured). As she came back to earth, the wildest play on the evening's theme entered the room: human dessert tables. Actors dressed like trees, with circular trays at their hips, held apples in one hand and beckoned guests with the other.
I caught glimpses of the mayor, in an open-collar button-down shirt, watching the aerial dance and then walking by one of the dessert tables. I could only imagine what he was thinking, but it was probably something like, No one invited me to parties like this when I was on city council!
The evening ended with Lounge Kitty and her band playing from the balcony above. Kitty sang the best kitchy tunes in her repertoire, from "Gypsies, Tramps and Thieves" to "I Will Survive," and even added a decent version of "Thriller," which inspired several in the crowd to try to imitate Michael Jackson's zombie video moves.
(Photo by Sarah Zilka)
Posted by Erick Trickey at 10:11 PM