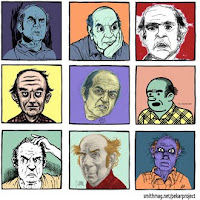 Harvey Pekar did not do small talk.

In fall 2003, I drove him and his wife to Tommy’s for an interview, my chatty banter utterly failing to dent their impregnable grouchiness. American Splendor, the biopic about Pekar’s life and underground-comics career, had just made Pekar the everyman hero of indie cinema, but the experience had only nudged his mood-needle ever so slightly.

“This was kind of an exceptional time for me, a diverting time,” he said over sandwiches, his huge, dark eyebrows in full weedy bloom. But he was “kinda depressed” it was ending, since he had to hustle for writing jobs again. Maybe the movie would help, he allowed. “Then I’ll be happy,” he said — and caught himself. “At least as happy as I get, which is not too happy.”

I respected that. Pekar’s gloom gave him an artist’s vision of Cleveland, like a painter going through a lifelong gray period.

“Ordinary life is pretty complex stuff,” went his credo, and paging through the anthologies of Pekar’s American Splendor comics showed that his realist’s eye caught something about the town by focusing on his file clerk job, his favorite cheap diners, his bohemian’s taste for jazz and klezmer. Over breakfast in a diner, cartoon Harvey chatted about the yuppies moving into Ohio City, driving up rents. Telling a story about his family, he looked up at a two-story house with a double porch and told his readers how Cleveland was once filled with big immigrant families who’d share a home -- one generation below, kids’ or brother’s or nephew’s family up above. His collage of West Side Market images showed the characters, the crowds, and the hucksterism of the barking vendors. “Ever see anything prettier?” one asked, holding a handful of cherries out to the reader.

The filmmakers took Pekar’s vision and let just a little sunlight in. “If you’re looking for romance,” he warned viewers, “you’ve got the wrong movie” — yet the film distilled Pekar’s relationship with his wife, Joyce Brabner, into a misfits’ love story. Shooting in Cleveland and Lakewood, the filmmakers discovered the town’s character in little bakeries and empty warehouses and brick apartment buildings, spots unchanged since at least the 1970s.

Pekar didn't change either. When I met him, Jane Campbell, then mayor, had just dissed his recent New York Times op-ed cartoon. “An air of depression pervades the city,” he'd written.

“Harvey’s been attacked for that for years,” Brabner told me. When he appeared on Late Night with David Letterman in the ’90s, some locals complained he didn’t join the comeback-city cheerleading and talk about the new Jacobs Field.

“There are people who like me to talk about Cleveland the way it is and be honest,” Pekar said.

Exactly. Pekar had to be relentlessly unsentimental to achieve his art: Seeing Cleveland's essence in everyday life.

(art from smithmag.net/pekarproject)
Posted by Erick Trickey at 2:37 PM