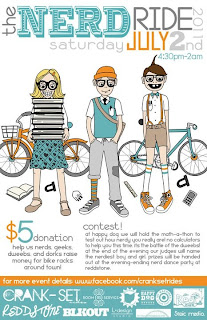 Lindsey Bower is a nerd and she’s proud of it. She knows she’s not the only one. So she and her boyfriend and fellow nerd, Dan Krivenki, are hosting the first ever Nerd Ride, a bike trip in which nerds, geeks, dweebs and dorks are invited to pedal across Cleveland to raise money to install bike racks around town.

The pair are co-founders of the nonprofit Crank-Set Rides, which organizes themed bike rides, such as last year’s zombie ride, to promote biking awareness. For their next idea, the two looked no farther than their own personalities.

The themed rides attract a slew of bewildered onlookers. At the zombie ride in October, Bower says one lady just stared at the 200-some zombies riding by, scared out of her wits, as if she thought the apocalypse had come.

This time, Bower expects just as much buzz. “Little kids come out on the street, and they’re so excited, they’re happy and running around and giving us fives when we go past,” she says. “That is such a good feeling. They’ll laugh when they see us dressed as nerds.”

Expect these cyclists to completely geek out with their costumes. Bower promises tube socks, bow ties, glasses, pocket protectors, suspenders and even wedgies. “Suspenders give you the worst wedgies in the world,” she says through vibrant laughter.

She hopes people will not only notice their outfits, but become more aware of the need to share the road with bikers. She also hopes to get the city to consider bike improvements. One bike rack has already been installed in Lakewood.

The nerd ride, which lasts from 4:30 p.m. on Saturday until 2 a.m. on Sunday, will lead geeks on a tour of hot spots such as the Happy Dog, which is hosting a geek-style Math-a-thon. It'll end at Reddstone with a nerdy dance-off.

holy crap!!! now zombies ride bike? OMG! is time to run and hide, ajajajaja is so funny see the different way that people choose to disguise in special ocassions.