The Ingenuity festival’s new fundraiser, Bal Ingenieux, held this Friday, May 4, draws its inspiration from Cleveland’s Kokoon Arts Club balls of the 1920s.

“Kokoon was known for their funky art parties with a risqué approach,” says James Krouse, director of programming for Ingenuity, an art party for the 21st Century. “They were about the cutting edge, getting out and celebrating.”

The Ingenuity festival combines art and technology for a free three-day event in September. The Bal Ingenieux is a fundraising precursor for the fest and takes place at Halcyon Lodge, the old Masons hall on West 28th Street in Ohio City.

He hopes to see guests in costume, channeling their inner Kokoon. “The spirit of everyone showing up in costume is what sets the bar for us.” Krouse recalls a guest decked in a full, red zoot suit at an earlier Ingenuity fundraiser. “I don’t know why he would have that in his closet, but it’s just what we’re looking for.” 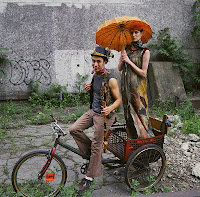 Krouse wants this year’s masked ball (where about 900 to 1,000 guests are expected) to be a preview of the festival, surrounding guests with musical performances and interactive art. Returning to Ingenuity after an overwhelming response from last year’s event is Cello Fury, a musical act meshing cellos and rock drums. Interactive artist Chris Yanc, creator of the Digital Graffiti wall, will also preview his plans for the September fest. (Another act, Zany Umbrella Circus, is pictured.)


Tickets are available at ingenuitycleveland.com and start at $20, ranging upward for different levels of performances, displays and drink tickets. And no worries if you don’t have a costume. Masks will be provided.