Rising Star Coffee. Vero – a wood fired bistro. Remember these names. They represent two new places on different sides of town with something important in common. The first, in the former firehouse at 29th and Church Street in Ohio City, is a specialty roaster and craft coffeemaker. The second, on Cedar Road in Cleveland Heights in what used to La Gelateria, turns out true pizza Napoletana. The proprietors of both are passionate and serious about authenticity, quality, and doing things the right way. Their products are for connoisseurs and those who appreciate excellence. 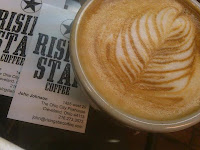 Kim Jenkins, a former engineer and corporate executive, is the man behind Rising Star. He’s been roasting in this location since February and started brewing retail cups in mid July. He uses only high grade, single origin beans most bought directly from growers- and does his own blending. Beans are roasted often and in small batches and the process is a science and an art. Every order is prepared fresh, one cup at a time. There are three brewing choices: the pour over (paper filter in a holder); the aeropress (French press with a paper filter); and the vacuum pot (an old method featuring a 2-chamber method that forces the water through the coffee all at once and keeps the two in continuous contact). You have to try them all to find your favorite. And then of course there’s espresso, and the variations on that. The daily menu of coffees available has tasting notes like a wine list: Rwanda Ruli Mountain- sweet, caramel, and citrus; El Salvador Cosecha Honey Natural- sweet, fruit, and chocolate. Milk comes from Hartzler’s a local dairy.

The cappuccino I had made with it and the Church Street Espresso (smoky, malt, cocoa reads the description) was utterly and uniquely delicious. In fact, I’d have to say- it was a impeccable expression of what this drink can be. Don’t head there expecting to hang out. The small café space doesn’t really have seating, though some benches and stools are in the works. For now it’s just counters to lean on and set a cup to cool.

Vero opened in June. Marc-Aurele Buholzer is the pie man. He’s young- or looks it- and radiates intensity. I wasn’t surprised to learn that he studied religion and philosophy in college (You’d be amazed by how many chefs did the same). Focusing his energy and intelligence on food, he spent countless hours experimenting to master the mysteries of dough and learn the quirks and moods of his wood burning oven. He’s so committed to the rules and regulations issued by the Italian Ministry of Agriculture that define the method of production for 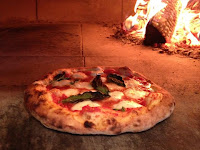 Traditionale Garantita Pizza Napoletana- from the type of flour to the color of the finished crust- that he’s printed them on the menu. But the true measure is in what comes out of the blazing oven (in 90 seconds flat) and to the table- a thin crisped round, bubbled up along the edges and slightly charred, splendid smelling and sublime tasting. And not like what most people are used to. Toppings are applied judiciously and thoughtfully. He’s designed glorious combinations that shouldn’t be monkeyed with- there are only four things you can add anyway. The two I’ve tried this far- one with San Marzano tomatoes, top shelf mozzarella, pancetta, an egg and cracked pepper; and the other a combination of garlic and oil, roasted vegetables, baby arugula and chevre- could not be improved upon in any way. 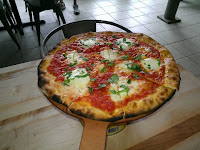 But the surest sign that Buholzer is taking things to a higher level is the fact that he strongly discourages taking his pies home in a cardboard box. They are best when just baked and so that’s when he wants you to eat them. For a food that’s considered the ideal take-out meal, this is a brave bold stand. I wish him well and plan to support his pursuit of perfection by stopping in for dinner often. The rest of the menu-like the space is small: some salads, an antipasto plate, bruschetta. And gelato. If you want wine, bring it.

The second, on Cedar best espresso machine home Road in Cleveland Heights in what used to La Gelateria, turns out true pizza Napoletana. The proprietors of both are passionate and serious about authenticity,