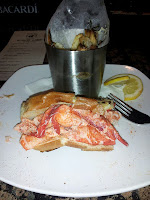 My Massachusetts born daughter-in-law is going to be very happy when she hears that Black Dog Kitchen and Bar serves what I believe is the only truly authentic lobster roll in town. She’s a fan and an aficionado and I think, when she tries this one, she’ll agree it’s the real deal, from the big chunks of tail and claw meat held together with just a hint of mayo to the soft lightly toasted New England style bun. But it does get a touch of Cleveland and a nod to our Eastern European heritage with a thorough dusting of Hungarian paprika. This one beats the famous version I’ve had at the famous Martha’s Vineyard tavern with the same canine name. Here, it comes with what have become the “it” potato all over town, frites fried in duck fat and seasoned with rosemary.

Describing itself as an American gastropub, the restaurant specializes in  Certified Angus burgers and upscale sandwiches and salads. The kitchen makes a serious effort to use local products. And lots of hometown references on the menu, among them the Lil Italy bruschetta, the Shoreway (a Lake Erie walleye sandwich); a Cleveland Po’Boy featuring hot sausage; and the Gateway Wedge.

At the helm is Nicholas Pejeau. This is both his first industry gig and his first time in charge. Two dishes that show off his personal style are a crispy pork belly appetizer that’s sauced with a nice sweet/tart balsamic, pomegranate blackberry reduction and a tasty seared ahi tuna taco with arugula, mandarin orange slices and sriracha aioli.

The Black Dog opened downtown last month. The main entrance is on East 8th, which is more of an alley than a street that runs between Euclid and Prospect Avenues, in the building that’s home to The City Club. It’s not in a basement but you do step down as you walk in and only a portion of the 147 seat dining area has windows. Together these factors give it a sort tucked away and off the beaten path feel. The vibe is super casual and multiple flat screen TVs are mounted on the walls. There’s a long bar, 12 taps and barrel based hi-tops in the first room, regular tables  and chairs in the adjacent area, and a private event space that accommodates up to 80 with its own bar.

This is a good choice for lunch, pre-game eats, and after working gatherings. You can’t beat the Happy Hour prices: craft and import drafts $3, wine by the glass, house martinis and signature cocktails all $4. Same deal on Saturdays noon- 4 PM. They’re also doing a Sunday brunch that features build your own frittatas, steak and eggs, and stuffed French toast. This will surely motivate some to rise, if not shine.
Posted by Laura Taxel at 6:00 AM

My husband and I, who have both been searching for a good lobster roll fix, were excited to try the one at Black Dog, per your recommendation here. But, I have to say I was a little skeptical — this being Cleveland and all — before I tried it. But, as you know, it was tasty and satisfying. So nice to know to know we don’t have to go to Portland, ME next time we need some lobstah. Good call. Thanks!