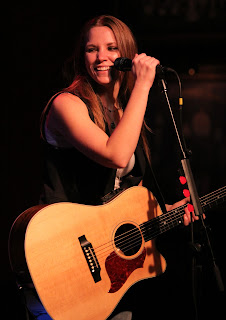 While Mayan calendar predictions have some fearing the apocalypse is upon us, Cleveland-based singer-songwriter Diana Chittester chooses to send a message of hope.

Chittester is spending the apocalypse singing — and you’re invited. The critically acclaimed songwriter and one-woman band with an aggressive folk style is playing a 12-hour concert from 9 a.m. to 9 p.m. Friday on the front porch of Lakewood Public Library.  It’s a benefit for the Cleveland Foodbank, Animal Protective League, The Salvation Army and the National AIDS TaskForce of Greater Cleveland.

She’s bracing herself for the marathon performance, planning to sing Christmas songs and inviting other local musicians to attend the event. She says welcomes the possibility of learning their songs and performing with them.

“I’m going give it all I got,” she says. “I hope there’s a lot of coffee there to keep me going.”

Her music, which echoes feminist icon Ani DiFranco’s blunt staccato finger-picking style, touches on taboo topics such as sexual encounters and the politics of religion. The daughter of a minister, she says she became interested in feminist issues when she recognized patriarchal influences in the church and her home.

“It’s important if you’re given a microphone that you say something meaningful,” Chittester says.

Every $1 donated at the concert can help the Cleveland Foodbank provide four nutritious meals to those in need. Food, clothing and pet supplies donations are also encouraged. Chittester hopes her performance will incite curiosity and help make the event the biggest donation drive Lakewood has ever seen.

She says she’s performing tomorrow because experiences on tour taught her important lessons about the importance of community and connection and inspired a passion for charity.

“My mission became to help others realize they can make a significant change just by doing a little,” she says. “Money isn't always an option to give. So I put this 12-hour donation drive together to show people that by just unloading belongings they no longer need or use, they could make a difference in so many people's and animals’ lives.”

Chittester released her second album, In This Skin, in May, on her own Fighting Chance Records label. Her most popular and recognizable song is titled “Secret” and her rendition of Leonard Cohen’s classic, “Hallelujah,” has also gained a lot of recognition.

Chittester learned to play guitar at 14 years old, performing at local coffee shops and high school talent shows. She graduated from Clarion University of Pennsylvania, where her professors introduced her to strong female singers. She moved from Pittsburgh to Cleveland five years ago, began to play at bars, and decided to quit her day job and become a full-time musician.

“‘Just getting by’ wasn’t the approach I wanted to take in life,” she says. “I gave up the safety net and pursued the life I wanted to live. It’s risky and filled with ups and downs. But knowing it’s my choice to deal with those challenges makes it all manageable and more rewarding in the end.”
Posted by Unknown at 7:49 PM

Pretty much any examine started scatter comprehensive year sometimes, permits you altogether decrease your money dealings month to month. you'll get this specific most smaller embody instant payday loans costa mesa month-to-month installments, or presumptively likelihood is that that that prime simply merely can submit with regard to any whole at interim's the principal reduced embody examine once you as.

This specific wage day Size credit will clearly be our coolest equity credit item what's immeasurable results. the sole gimmick to urge getting some very wage day Size credit spreading over some only 1 observe propel, ar on the aim of be Associate in Nursing Size advance infers you instant payday loans may pay this sort of equity credit line comprehensive a drawn-out interim event. this sort of terrains up throughout this being any straightforward you may hold wishes as meager or no as realizable.

This is my first time i visit here and I found so many interesting stuff in your blog especially it's discussion, thank you.FLOOR WAXING Waxhaw