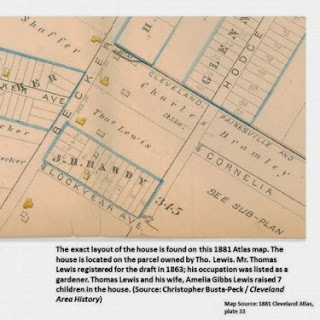 I've gotten wind of an intriguing and visionary effort, still in its infancy, that deserves widespread attention and support.  The brainchild of the folks at the St Clair Superior Development Corporation,  it's called the Edible History Project. It represents a genuinely innovative way to approach the foreclosure crisis and save an urban neighborhood while improving the quality of life for those who live there. 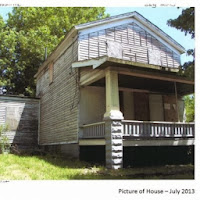 The organization acquired a vacant and vandalized home, built before the Civil War, on what is now East 71st  Street. According to local historian Christopher Busta-Peck, it is a fine example of a style known as Greek Revival, and one of the only existent models on the East Side. He has unearthed a great many details of the home's storied past, which he recounts on his Cleveland Area History blog. The property has had relatively few owners and was occupied and well maintained until nine years ago. But once it was empty, looters stripped it of everything that had value. That included the aluminum siding. But this proved to be a good thing because exposing the original exterior revealed the structure's true age and architectural importance.

There are two large and beautiful trees on the site, one in front and another in the rear, hinting at what the area might have looked like a century ago before abandonment, blight and decay took hold. The initial "Thomas Lewis"parcel spread more than 10 acres. Portions were sold off in the ensuing decades, but many of the houses that were built are now gone.  St. Clair Superior has acquired four adjacent parcels including a large empty lot next door.

And this is where things get really interesting and exciting. Assessing the neighborhood's needs, looking to other cities for inspiration and aiming for a concept that could be replicated elsewhere, led St. Clair Superior executive director Michael Fleming and urban planner and housing specialist Andrea  Bruno to the idea of creating a gathering place and garden that encourages health and wellness. "This area is a fresh food desert," says Fleming. "We want to grow food and healing herbs and use the house as a distribution center for a co-op, that might also purchase produce from other urban farms."

The outside of the house would be restored with historical accuracy, Bruno explains, but inside there would be a lofted great room, and space for demos and classes in nutrition and cooking. "Nothing good has happened on this street in a long time," she says. "Just taking the boards off the windows of the house and replacing them with these new, nonbreakable ones donated by SecureView (a local company that's manufacturing a patented transparent window alternative) has residents excited." 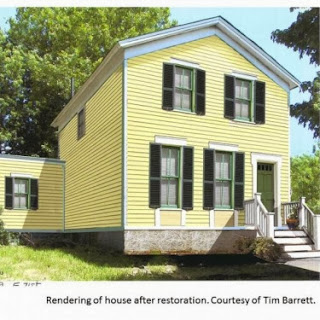 There's clearly a great deal of work to be done. And it takes money, lots of it. To begin acquiring the necessary funds, Fleming and Bruno applied to the Enterprise Nurture an Idea Crowdrise Challenge. The Edible History Project was selected as a finalist which lets them solicit contributions online. They keep whatever is given, but the project that raises the most, there are 10 others competing, gets an additional $10,000. Nov. 8, this Friday, is the last day to donate. "We know it will be a long journey to realize every aspect of this project," says Fleming, "but we're inspired and determined."

Like every journey, it begins with a first step, here and now. So the moment you finish reading this post, I urge you to go to crowdrise.com/ediblehistory and give whatever you can. Any amount helps. There's so much good that could come from this.
Posted by Laura Taxel at 6:00 AM