Brian Reilly has a 216 area code, but he's no longer cooking in Cleveland. The former Noodlecat chef has taken his knives to Seymour, Connecticut, where he's now executive chef at Tavern 1757. The June move was unplanned but was an opportunity too good to pass up. We caught up by phone last week.

LT: You landed the new gig after beating out the competition on Food Network's "Chef Wanted With Anne Burrell." How did it happen?

BR: The show producers came to me. The first thing I did was call my mother. Then I called [Jonathon] Sawyer and he told me to go for it — he's been totally supportive — but I never expected to win. By the time the final episode aired in August, I was already gone. The whole thing was pretty surreal. 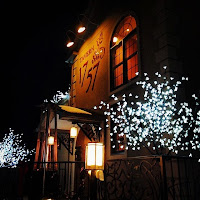 LT: Was a job at the restaurant guaranteed?

BR: No. Owners don't necessarily have to hire you.  In fact, I was the only one who actually got a job in season three. After we finished filming, the owner and I sat down three hours before I was scheduled to fly home and came to an agreement.

LT: What kind of food are you cooking?

BR: I'm doing mostly rustic Italian with some more Asian-influenced dishes added. It's kind of a combination of classic Italian and new, creative American. This isn't a foodie-centric area like Cleveland, so we have to go slowly. I just got my first review in New Haven Living. The writer loved our food. Gave us four and half stars.

BR: I've left Cleveland three times, and I always come back. Things are going really well for me here right now, but who knows what's ahead.
Posted by Laura Taxel at 6:30 AM

Did you know you can create short links with Shortest and receive cash for every click on your shortened links.