A Modern Fairy Tale: Father and Daughter Break a Barrier in Disney Race 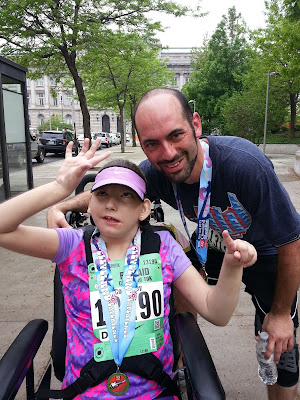 Dan Boyle is pushing for a change — literally. For three years, the Lee Eaton math teacher has been pushing his daughter, Courteney, in a wheelchair in 5Ks and 10Ks throughout Northeast Ohio. Courteney is nonverbal and was diagnosed with the rare neurological condition, Moebius Syndrome as well as intestinal failure. Having a love for Disney and running, the father-and-daughter duo wanted to do the Disney Glass Slipper Challenge, a 10K followed by a half marathon the next day. But Disney doesn't allow wheelchairs, so the father petitioned Disney until it eventually changed its policy. “Finally in mid-June, I got a call from the director himself, who said, ‘Hey, we’d like to invite you to participate.’" Boyle recalls. "We were in the parking lot of Chick-fil-A in Macedonia, and I started crying.” Courteney is the first person approved to get pushed in a wheelchair to compete in the Disney Princess Half Marathon weekend.

The family blazed a trail, already dashing through red tape for others to join the race. "My wife and I have been marveled at how many people have said, ‘We couldn’t do this, but now we can.’ Its been exciting and humbling," Boyle says. The Boyle family, who has another child with disabilities adopted from El Salvador, is running the course to raise money for Rina, a woman in El Salvador with disabilities. We caught up with Boyle to talk about making history, his daughter and why the race is so important to them.

Q: What was your process on getting Disney to change their policy?
A: I got in touch with someone who said, "For safety reasons, we don’t allow mobility aids." I was told, "No," and I asked if I could appeal it. They had a waiver I could fill out which gave them permission to look up Courteney’s medical records. They told me my request was being looked into. So it went from "No," to there’s a little bit of hope. April, May, and June had gone by, and I got a call from the director, his words were, "Disney wants to be more inclusive," so they said, "Yes, we could do it." Disney has maintained that its going to be case by case, but that is better than no. There are at least three other people doing it this weekend with us.

Q: Does Courteney have a favorite character to dress up as for the race?
A: That’s a tough one. As far as princesses go, we love Cinderella. My daughter will be in her wheelchair, and we’ll have Christmas lights around it to light it up. It's kind of a take on Cinderella’s carriage. She’s wearing a princess tutu and a T-shirt that says, "Roll like it's midnight." I’ll be one of the few men, but I’ll be dressing as Cinderella’s prince charming.

Q: What does Courtney like about running?
A: She loves to have fun. When she is excited she’ll wave one of her arms up in the air, [and] she likes the wind blowing on her face. She really [has] a great time so I thought, If she loves running this much, we need to keep going. My wife and I have said that even though both of our kids are in wheelchairs and neither of them can talk, we want to give them the most normal life possible. If other kids are out doing these things, we want our kids to do [them] too. Running is one of those things.
Posted by Unknown at 12:17 PM