Cavs Fan Guide: Ilthy's Glen Infante Wants You To Believe in the WIne and Gold 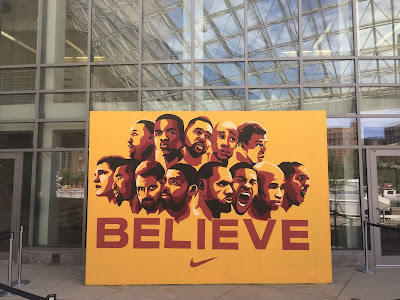 As soon as the Golden State Warriors had completed their miraculous comeback against the Oklahoma City Thunder to assure a rematch of the NBA Finals, they were the favorites. Vegas said so, as did the talking heads constantly cluttering ESPN’s airwaves. No one believed in LeBron James and the Cavaliers. Unless you talked to people in Cleveland. To commemorate the city’s faith in the Wine and Gold, Nike launched the Believe marketing campaign. The crown jewel of the marketing strategy came via local artist and Ilthy clothing company owner Glen Infante, who live painted a mural of 12 players above a bold, wine-colored “Believe” outside Quicken Loans Arena. We caught up with Infante and got the story on how it all came about.

We were approached by Game Seven Marketing, a marketing firm that works for Nike. They wanted to get in touch with a local artist to help create this campaign, Believe. I was referred to them by DJ Steph Floss. He gave me a call and said I have this huge opportunity for you. Nike had seen my work and they said they really liked my portrait style and wondering if I could do it at on a large scale. It was after Game 2 was over, and the Cavs were coming back home. That’s when they hit me up. There was two days before Game 3, so I had to work really fast. It was very spontaneous. I had to drop everything I was doing to work on this.

I started the design process and came up with that mural. They loved it pretty much instantly. It only has players that have shoe deals with Nike, so Iman Shumpert and Matthew Dellavedova aren’t on it.

I did the priming before, so it was painted gold. But the whole stenciling and outlining, that was done on site before the Fan Fest of Game 3. I started around 1 p.m., and the Fan Fest started at 5 p.m. Everyone was chanting “Let’s Go Cavs” while we were painting. It it was impossible to paint 12 giant heads so we ended up painting through the Fan Fest and into the game, but people kept us posted on what was happening.

I do think the campaign has been working. If Game 5 didn’t solidify belief and put a stamp on our campaign, then I don’t think fans had any belief from the beginning. Yeah, they’re not the perfect team, but when they’re clicking they look pretty unbeatable. You have to believe in LeBron, especially with Kyrie by his side. I think we’re going to win tonight. — as to told Kevin Stankiewicz

Posted by Kevin Stankiewicz at 3:56 PM

Let me say it straight.

I don't care about sports. Shame on me but I don't even know the football rules.

I tried EVERYTHING from forex & stocks to internet marketing and affiliate products.. I even made some money but then blew it all away when the stock market went south.

I think I finally found it. Grab It Today!!!


in cheap rates, You guys also contact them for best services!