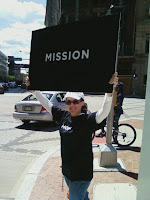 "We want to keep him at home," said the woman at East 9th and Euclid wearing a T-shirt that read "Home" and carrying a sign that read, "Mission." She and three other black-clad mystery figures staked out the intersection's four corners at lunchtime today, the first day of LeBron James' free agency.

The signs and shirts bore the familiar designs of the More Than A Player publicity campaign aimed at convincing LeBron to stay in Cleveland. It's the same group that launched last month's Tower City flash mob.

The sign lady wouldn't give her name. The sign guy across East 9th wouldn't even let me take his picture. They said they were volunteers. But the Plain Dealer's basketball reporters wrote that Cavs employees made up a sign-waving crowd staking out the IMG Building. Sounds like Dan Gilbert's not waiting until Saturday to lobby his star.
Posted by Erick Trickey at 4:41 PM