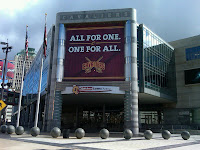 Tomorrow night, Cleveland confronts the future it thought it had, the hero it thought it made. The whole sports world will watch as the Cavaliers confront LeBron James for the first time after the breakup.

It's our chance to show LeBron, and the country, and ourselves, that the Cavaliers' slogan, "All for One, One for All" -- the musketeers' code of humility and equality -- fits Cleveland better than star worship.

Wright Thompson gets that. He's an ESPN.com writer who visited Cleveland for the Cavs' home opener and stayed long enough to get to know the city. He's penned a first-rate piece about Cleveland's pride and preoccupations, our neuroses and our codes of honor.

Cleveland used to be the center of America's rise, he writes. This used to be a factory, and these used to be jobs, and this mill used to be a future, not a silent metaphor for the past. There are two Clevelands, the one that exists today and the ghost city floating just above it, in the memory of the people who've been here for a long time, and in the imagination of those who just arrived.

Thompson's piece avoids the too-common traps of the fly-in national writer trying to define the state of a city. He doesn't grab the most provocative thing someone tells him, doesn't gravitate to the worst disappointment. Instead, touring the city with several well-chosen guides, he listens for patterns, recurring ideas, then digs deeper.

Much like Cleveland Magazine's December package "Our Miserable Year," Thompson notes the irony in Harvey Pekar, who embodied the complete opposite of sports heroism, dying just days after LeBron's Decision.

Who will Cleveland miss more? Thompson writes. That question is a proxy for a larger, more difficult one: Is the future of Cleveland in the image of LeBron James or Harvey Pekar?

Thompson feels the hurt LeBron inflicted on the city, but his insight into LeBron's motivation and character, gained on a drive from the Q to LeBron's mansion in Bath, is saddened, not angry.

LeBron rose above every possible obstacle. ... His greatest dream, it seems, was to make a life in a perfectly normal, nice suburban subdivision. It's so clear now. LeBron James went from poverty to the bubble of celebrity. He's spent his entire life on one of these two islands. He's not from northeast Ohio. He's from his own struggle.

He completes the thought later, when he notices LeBron's admiration for what the Saints mean to New Orleans:

Instead of grasping the golden ticket to Legend, he seemed to want the ordinary one to Star, the sporting equivalent of a perfectly normal, nice suburban subdivision. Whatever the reason, he didn't get that Cleveland felt about him the way New Orleans feels about the Saints.

There's plenty more -- poetic observations from Dennis Kucinich, dinner with Daniel Gibson at a neighborhood bar in Westlake, Lithuanian moonshine in Collinwood. More than a blogger can blog. Check out the full story here.
Posted by Erick Trickey at 3:25 PM