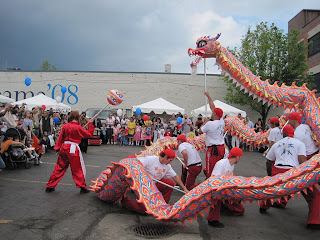 After attracting more than 10,000 visitors the first time, the Cleveland Asian Festival returns this year with one more day and two celebrities.

The festival celebrates Cleveland’s Asia Town neighborhood this Saturday and Sunday from 11 a.m. to 7 p.m. at Asia Plaza at East 30th Street and Payne.

Displaying surprising star power for a young festival, the event will feature Dat Phan, the original comedians from Last Comic Standing, on one of two outdoor stages. Yin Chang, the rising starlet seen in this month’s Prom and weekly on Gossip Girl, will do meet-and-greets.

This year the festival added a second eating contest to its lineup, giving guests two chances to watch competitors stuff their faces with samosas and egg rolls as fast as humanly possible. Guests who want to skip the stomach ache can put on an inflatable sumo-wrestling suit or watch a Vietnamese fashion show.

The festival is growing. It's already sold out of space for exhibitors and filled a waiting list. Organizers expect an even bigger crowd than last year's.

If you have a thirst for arts and crafts instead, the annual Hessler Street Fair takes place this Saturday and Sunday from 11 a.m. to dusk on Hessler Road in University Circle. Going strong for 42 years, this fair is famous for hippie culture, on-site neighborhood art projects and musical performances every hour until the sun goes down.
Posted by Kelly Petryszyn at 11:37 AM