It's March, the month that belongs to the Irish. Drinking is the way many honor the country, the culture and the land's favored saint. But after the parade, and when the green beer's gone there's another, better way to get in the spirit, or perhaps I should say into the spirits. 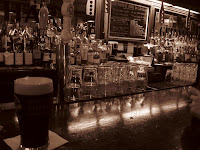 On Thursday, March 21 Parnells — a genuine pub in Cleveland Heights, run by a genuine Irishman —  hosts the final event in a series known as Dr. Drink's Traveling Apothecary Show, Whiskey Class. The teacher is Joe DeLuca, barman extraoredinaire, alcohol authority, poet of potation and libation showman. He's also the founder of Beverage Resoures, a consulting firm, and vice president of the Cleveland Chapter of the United States Bartender's Guild. And he knows his stuff. I've attended several of his "traveling shows." In addition to having a good time, I'm always impressed by the depth of breadth of his beverage knowledge and his entertaining way of sharing it.

Of course, it doesn't hurt that encounters with Dr. Drink are always accompanied by glasses of adults-only goodness. And the upcoming evening is no exception. For this short study of the Water of Life, he focuses on distillers who are coloring outside the lines, using nontraditional ingredients and methods.

Participants will sample OYO Wheat whiskey, distilled in Columbus; Jim Beam Devil's Cut, made by extracting the bourbon from the wood of the barrel it ages in; Bernheim Wheat, a new small-batch product from Kentucky; Dead Guy Whiskey, from beer brewer Rogue; and Maker's Mark 46, long-aged and mellowed with French oak staves in the cask.

Attendees are sure to learn something (which can be used to impress friends), have a few laughs, and go home with a bit of a glow. Cost is $30 per person and reservations are required.

Get all your favorite spirits and wines on Duty Free Depot!