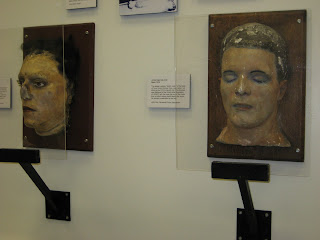 This weekend, I went on Cleveland's most macabre tour, which includes no haunted houses or ghost tales, just actual killings. Haunted Cleveland's Torso Murders tour tells the homicide-curious the story of the never-identified serial killer who decapitated and dismembered 13 victims in Cleveland between 1935 and 1938.

I've read the two main books on the murders, Steven Nickel's Torso and James Jessen Badal's In the Wake of the Butcher, so I figured I was prepared. Anyone who'd pay $50 for this tour likely has a strong stomach and an appreciation of dark horror. But my friend and I were still caught off guard -- we did not expect such an uncensored trip through the county coroner's office, including the sight of bodies under sheets, their toe-tagged feet sticking out. By comparison, the bus ride through Lake View Cemetery was downright sunny. Our destination was Eliot Ness' gravestone. The legendary Treasury agent and Cleveland safety director investigated the torso murders but could not solve them -- a failure many torso enthusiasts blame, inaccurately, for his career's decline.

Buddy Kovacic, a retired Cleveland homicide detective, narrated the tour. As the sun set and the tour followed Kinsgbury Run, where many victims were discovered, Kovacic explained historians' leading theory about the murders. Their research points to deranged surgeon Francis Sweeney, whom Ness secretly interrogated for days, and who sent Ness disturbing, taunting postcards for decades afterward. (Click here and scroll down to read James Jessen Badal's 2006 Cleveland Magazine article about Sweeney.)

Last stop was the Cleveland Police Museum, which has a torso murder exhibit that includes the death masks of some victims (pictured). Badal, the torso-book author, took questions about the murders and revealed he is working on a second book about them. It will focus on suspect Frank Dolezal, who died in jail after his arrest for one of the murders, and Sweeney, the secret suspect.

Haunted Cleveland may run the torso tour once more this year, but its focus this fall is on its Halloween-season Burning River Ghost Tour.
Posted by Erick Trickey at 6:46 PM

I think the police museum is very creepy, but I also think it might be very nice visiting it.Thanks for sharing the pictures.