Literature, comedy vie for top billing at Wise Up! 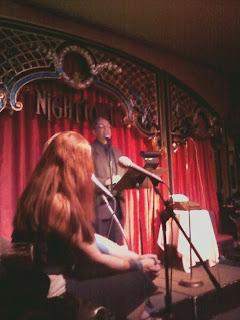 Is Cavs owner Dan Gilbert an unacknowledged literary master? Or just an unintentional comedian? I wondered that after Sunday's Wise Up! literary festival at Nighttown, where comedy and song vied with literary ambition as the top draw.

Directors Regina Brett and Derdriu Ring (pictured, left), like good variety-show emcees, kept the benefit for Cleveland Heights' libraries moving with quirky introductions built on the performers' best memories of libraries and wildest ambitions for them. Newscaster Leon Bibb (pictured, right) recited his poem comparing his mother's clothesline to a chorus line. Charles Michener read the quiet but finely observed conclusion to his New Yorker piece on the Cleveland Orchestra. Steve Presser contributed quotes from the buttons and bumper stickers he sells at Big Fun. Between readers, pianist Joe Hunter and vocalist Doris Long sang old standards, including Cole Porter's "Brush Up Your Shakespeare," which advises men to memorize the Bard of Avon to woo women.

Former Cleveland Heights poet laureate Loren Weiss contributed the best combination of a literary eye and a sense of place. In his poem "Looking Through Glass," he sees a couple embracing, then fighting, inside the Coventry parking structure's glass elevator. Then a truck obscures his view. In the last stanza, his coffee turns bitter and he heads back into Tommy's for another, hoping "for a better ending." Ironically, his was just right.
Posted by Erick Trickey at 12:12 PM