Talking in my sleep 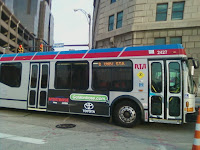 I first heard the voice this spring. Even my apartment's air conditioner couldn't drown it out. Now that the windows are open again, I hear it more than ever, robotic and relentless, like the talking billboard hovercraft in Blade Runner coaxing city-dwellers to live off-world.

Large, motorized public transportation has plied our streets for 122 years, but not until 2010 did someone decide it must speak. Now, every RTA bus blares the same drone mantra whenever it makes a 45-degree turn.

Outside my apartment, where a bus stop stands next to a line of parked cars, that means 60 times a day and once or twice an hour at night until 12:29 a.m. The voice also follows me downtown into the office: The clamor of six bus lines resonates up East 14th Street just outside my window.

RTA has me trapped. If I protest this noise pollution, I am guilty of indifference to human life. RTA installed its monotone warnings after two bus drivers killed people with careless turns.

So until I move, I'm stuck with the android tones haunting my half-sleep. I wish our transit overlords would hear the common-sense solution: the bell that sings from their HealthLine buses.

And yes, if I ever get hit by a bus, this will make a lame epitaph.
Posted by Erick Trickey at 8:58 AM