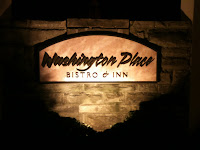 I admit to feeling an initial twinge of nostalgia when I pulled up to the corner of Cornell and Murray Hill Roads last and saw The Baricelli sign replaced with one for Washington Place Bistro and Inn. But things change. Chef Paul Minnillo closed his restaurant last July and this was a party to introduce the media to new operator Scott Kuhn and Executive Chef Jonathan Guest. I was ready to let go, move on, look around, find out what these guys were up to and, of course, eat dinner.

The place is completely though sensitively refurbished with an understated modern look that generally blends seamlessly with the original architecture of the 19th century mansion. The cheese cooler that dominated the lobby is gone- though happily Minnillo’s cheeses, along with chevre from Mackenzie Creamery are used in the kitchen - and the adjacent dining area has been turned into an inviting bar.

The evening kicked off with a selection of passed hors d’oeuvres: spoonfuls of shrimp and grits; hangar steak crostini, goat cheese strudel, and cheese puffs. Before the group split up to take their seats for a five course tasting experience, Kuhn did some welcoming and speechmaking, explaining that the all-American name of his latest venture (he also runs Burton’s Welshfield Inn , 87 West at Crocker Park, and a restaurant in Pennsylvania) is a tip of the hat to his grandfather, a passionate patriot. (Read more about Kuhn in this month's Cleveland Magazine.) Then he introduced Guest, a sweet faced, rake thin guy with a shaved head- the di rigueur style it seems for today’s young chefs- who's the man behind the menu.

To show what he can do, Guest served us a tri-colored roasted beet salad with creamy Mackenzie goat cheese ranch dressing; potato truffle pierogies from Ohio City Pasta topped with his own oxtail ragout and horseradish crème fraiche- a big hit at our table of four; scallops with butternut squash risotto; pot roast and roasted garlic mashed potatoes; pan seared salmon and an exceptional cauliflower gratin topped with crisped slices of Killbuck Valley mushrooms; and a brownie made special with the addition of sea salt, Jeni’s chocolate ice cream and a drizzle of bittersweet chocolate sauce. All these dishes and other moderatley priced comfort food favorites- meatloaf, mac-n-cheese, pork chops, rib eye steaks and burgers- are in the line-up for lunch and dinner.
This was my first taste of Guest's cooking, Everything was delicous, demonstrating both raw talent and the real world ability to execute that this young chef clearly brings to the job. I hope he’ll eventually bust out and add some options that go beyond the tried and true things we see at so many places around town, pushing the culinary envelope, and himself, a little further. The meal I had suggests he's got what it takes and that the results would be incredible.

Washington Place is now officially open to the public. They’re offering $5 cocktails and appetizers during the 4-7 PM happy hour and brunches on Sunday from 10 AM-2 PM. Wednesday’s are a bargain- $40 buys one ap for sharing, two entrees and a bottle of wine. Hey- that’s tonight. Good time to make a first visit. I'm guessing it probably won’t be your last.
Posted by Laura Taxel at 8:00 AM