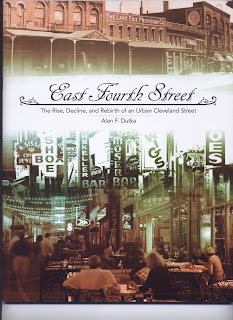 The retired businessman-turned-author says the one-block strip, which contains many of the city's most popular restaurants, is changing people's perceptions of the city. Dutka's book, East Fourth Street: The Rise, Decline and Rebirth of an Urban Cleveland Street gives readers a historical insight into the now famous strip.
Readers can learn about the all-female orchestra that performed on East Fourth in the 1920s, the Opera House that hosted the popular Ziegfeld Follies, and the restaurant opposite the Opera House's stage door that would give actors fuel during quick intermissions.

Today, you can find Dutka on the street itself. The author is hosting a book talk at Pickwick and Frolic from 4 to 6 p.m. to discuss the history of East Fourth. We caught up with Dutka this morning and found out why the century-old street is a Cleveland gem.

Cleveland Magazine: What was your goal in writing this book?

Alan Dutka: My biggest goal was interviewing the people who made [East] Fourth Street what it is today from what it was 20 years ago. There's a really good story about how a very limited number of people can accomplish a lot if they put their mind to it. We’re talking two to three people who had the vision to turn a deteriorating street into an exciting place for tourists and the people of Northern Ohio.
CM: You delved deep into the history of Cleveland to write this book. What is an interesting piece of history of East Fourth Street that you discovered?

AD: The story of the Euclid Avenue Opera House [Cleveland's most prestigious theater from 1875 to 1922, located at present-day Pickwick and Frolic]. A lot of people know the opera house was there, but in the text I tried to emphasize the human interest part of it.
CM: If you could describe East Fourth during the 1940s and 1950s in one word, what would it be?

AD: Deteriorating. By and large, it was an area that continued to decline. Today it’s the same kind of vibrant area that it once was 100 years ago, but in between you had three-quarters of a century where there really was a decline.

CM: And today the street has restaurants that are known on a national level. How will this status help Cleveland evolve?

AD: With all the nostalgia that you hear today, you never really hear about great restaurants in Cleveland, and what I’m getting at is restaurants the New York Times would write about. But that’s happening today, and it’s something that has never happened in Cleveland before.
Posted by Jenn from A Pop of Style at 10:31 AM