Filming for "The Avengers" starts off with a bang 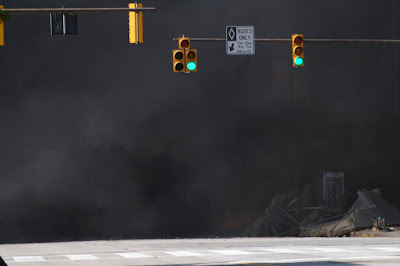 The camera was in place. Police demanded everyone stand back. Crew members shouted, “Cover your ears!” The crowd of onlookers quieted in anticipation as the director yelled “Rolling!” A thunderous roar sounded as fire from dozens of explosions rumbled down East Ninth Street, erupting into one large blast. Cars flipped. Smoke billowed and then, in a matter of seconds, it was over.

Monday was Marvel Studios's first day of filming for "The Avengers" on the streets of Cleveland. East 9th Street between Euclid and Prospect Avenue will be closed until the end of the month. Employees at Medical Mutual caught a video of the explosion from their office that overlooked the action. Bystanders also posted videos of the scene to YouTube.

Posted by Kelly Petryszyn at 9:12 AM

They did an great thing with each hero movie and then they make the avengers so people know more about then and their story.