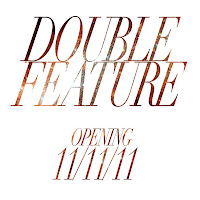 A new gallery has popped up on the Cleveland art scene, but it may not be there for long. Double Feature, an eclectic pop-up gallery, is set to open today in the Gordon Square Arts District on the city's West Side.

Double Feature’s two-room space will play host to an array of fine art, a unique shop and various events throughout the holiday season.
The gallery is run by four friends, who came together through involvement with other artistic ventures around Cleveland, namely Ctownartparty. The group wanted to create a space that showcased local and national artists in a fun and casual environment, according to founder Rachel Hunt.

“We saw that there was this gap where we felt there weren’t a lot of emerging national artists being exhibited in Cleveland,” she says. “So we really wanted to start integrating national and local art, and to frame it on the same wall.”

With its attractive layout, foot traffic and established arts organizations, the newly renovated Gordon Square is a good fit for the small gallery. The four partners hope to return the favor by attracting new people and young talent to the up-and-coming area.

Double Feature already has a number of events planned for its two-month residency, including participation in Gordon Square’s “Bright Night,” children’s art workshops with local artists, and a holiday sweater show.

Despite an inclination to bring in outside artists, the founders emphasize that the gallery is “quintessentially Cleveland,” from its prices (the most expensive piece being $2,000) to its feeling of community.

“It doesn’t matter who you are,” says Hunt. “You can buy art and be a part of the art scene. You’ll feel like you’re welcome to just kind of hang out with us on Friday nights like you would at somebody’s house.”