Milk and Potatoes in Cleveland Heights

When he got pink-slipped by corporate America in a downsizing frenzy, Keith Logan embarked on a journey that involved cross-country travel and soul searching to discover what he wanted to do next. He found his passion and purpose in making good things to eat. The result is Sweetie Fry. There are just two options on the menu at this little corner spot: ice cream and french fries. It’s a clever choice since just about everybody in America loves one or both. In all kinds of flavors and variations that display his natural flair for culinary creativity, they are each made in small batches to the highest standards with the finest ingredients Logan can get his hands on. And they are equally, irresistibly delicious. 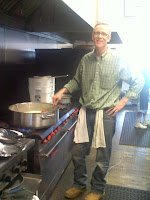 Logan gets his milk and cream from a local producer and uses an ice-cream-making process that, he explains, is superior to the standard approach because it intensifies the taste of whatever he adds to the butterfat. According to him, nobody else in Ohio does it this way. He learned the method from some acknowledged experts and perfected his technique at home until opening on Lee Road in October. After sampling many of the options on his chalkboard, which often change, I can verify that he’s doing something very right. His vanilla bean and butter pecan are the best versions I’ve ever had. The caramel pear is amazing, more so with a drizzle of his salty caramel sauce. Maple bacon, laced with bits of candied pork, will be my downfall because I live dangerously, conveniently close, and he keeps late-night hours. 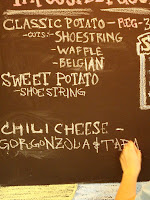 If the ice cream doesn’t become an addiction, the fries will. It’s a seven-step, labor-intensive process involving some pretty high-tech equipment. And it’s the sauces on the side that take these tubers (Idahos waffle cut or strips, and orange sweet potatoes) to the next level: hot and sweet chipotle, barbecue mayo, Indian masala and toasted sesame. Then there are what Logan refers to as the entree options: baskets of fries tossed with shredded Parmigiano Reggiano and truffle oil (heaven); topped with chili and cheese (haven’t tried … yet); or paired with Tabasco and crumbled gorgonzola (didn’t think I’d like this but found I could not stop my hand from picking them up and putting them in my mouth). Order at the front counter, take a seat, and when they’re ready, Thomas Hathaway, a man who used to sell peanuts at the ballpark, gives you a hearty booming shout-out to retrieve them at the pick-up window in back. They come in a paper cone tucked in a cute metal holder with dipping cup attached.

Then there are the desert fries. These batter-based babies are in a class all their own. Reminiscent of funnel cakes but far superior to the greasy stuff sold at fairs and carnivals, they’re dusted with cinnamon and maple sugar. While chatting and sampling with Logan, I suggested we try dunking them in ice cream, something he hadn’t thought of before. Definitely a good idea and better as the ice cream gets soft and melty.

There are eight tables plus a little one for the youngest customers. Logan wants Sweetie Fry to be a neighborhood hang-out, a place where everyone (and that includes toddlers, high school kids, and adults of all ages) feels at home. He warmly welcomes each person who walks in the door and feels like he’s investing in the community as well as his business. Logan clearly likes what he’s doing, and his favorite part is watching the look of pure pleasure on people’s faces when they try his creations. Stop in and make his day. 2301 Lee Road, Cleveland Heights
Posted by Laura Taxel at 6:00 AM

We were just in the other day and the ice cream and samples were delicious. Hard to choose a favorite! Great place and I'm already recommending to my friends.
Cindy N. - Hudson, OH

Amen! Craftsmanship and hospitality. This place is the best - a great addition to the neighborhood and Cleveland's culinary scene.
Ed G. - Shaker Heights, OH

This will be my downfall. An outstanding addition to the Cedar Lee neighborhood. (try the masala sauce. I could drink it from the cup)