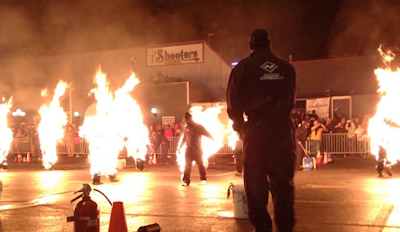 Things got heated at Shooters in the Flats this past Saturday. More than 1,500 spectators watched as 21 people become human candles to raise money for charities. The feat set a new Guinness World Record for the most people simultaneously performing full-body burns.

"The whole thing is nerve-wracking — your adrenaline's pumping, it's really just an amazing experience," said Hotcards CEO John Gadd of being set on fire. "But when I was lit, it actually became calming. I was just focused on moving my body and watching the people around me."

Two months prior to the event, trained stuntman Ted Batchelor of Chagrin Falls helped prepare each individual burner by lighting their arm on fire and then demonstrating a full-body burn himself.

In 2009, Batchelor oversaw and took part in the previous Guinness record, where 17 people were simultaneously set on fire in South Russell. Prior to that, Batchelor also had set a Guinness record of longest full-body burn without oxygen in 2004. "I felt so comfortable with Batchelor as our stunt coordinator," Gadd said. "He was incredibly methodical during the entire process, always assuring us there would be no room for error."

Originally, 20 people were supposed to be lit. At the last minute, however, mayoral candidate Ken Lanci was added to the group. With only a month to train for the event, Lanci enthusiastically took up the challenge. "We had a stand-in just in case someone were to back out," Batchelor said. "But literally seconds before we began lighting, everyone pulled through, and I made the decision that everyone that was suited up be lit." 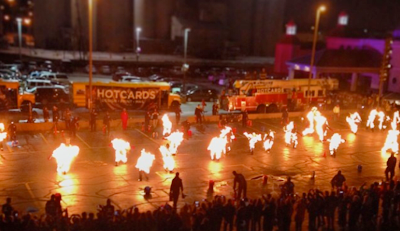 Accompanying the burners were their own personal ignitors. Each ignitor was responsible for dousing the burner with fuel and lighting them with a three-foot wooden torch. Once ablaze, each burner walked back and forth across the parking lot, waving their flaming arms and legs for 32 seconds in a scene that looked like it could have been pulled from a horror movie.

"It's one thing to have your arm being lit on fire during the practice sessions, but when it's your whole body, that's when I got a little nervous." CEO of Fresh Brews Tees Tony Mandalone said.

For many burners, their motivation for getting torched was helping a good cause. The proceeds from the event benefited the Cleveland Foodbank and Brick by Brick, a nonprofit organization that helps impoverished women and children in South Africa, run by Simone. “For charities like these, I told myself, You know what, I’m alright with losing a layer of skin,” Berwick said after being extinguished.