Hanging Out in Hudson 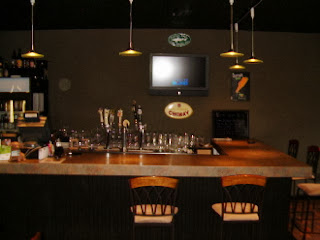 My dining travels tend to be more city-centered than suburban. But friends who wanted a dinner destination somewhere between Cleveland and Akron suggested we rendezvous at North End in Hudson, a wine and beer bar, retail shop and restaurant. Never heard of the place but the husband and I were happy to oblige. It turned out to be a pleasant discovery.

The front door opens into a compact beer bar with eight on tap, more in a cooler and a TV on the wall. To the left is a bright spacious wine store with more than 1000 bottles on display. Tables are scattered throughout the room among the shelves, racks and wooden bins with seating for about 55. The walls are decorated with wine-related posters and brand banners. 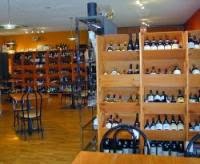 The menu, which changes seasonally, has some nice nibbling options, plus a small but solid lineup of entrees. We began with a shared cheeseboard, not the most unusual selection I've encountered but a respectable array of quality products. I moved on to a nicely done salad of charred romaine hearts in an herbed vinaigrette with shavings of Parmesan. The husband chose a burger in large part because it came with pierogies, though the cheddar, peppered bacon and garlic aioli definitely had its own allure and gave the combo a definitive two thumbs up. Based on our companion's enthusiastic recommendation, I ordered the braised short ribs sauced with a port wine reduction and sided with gnocchi.  I took most of what was on the plate home, not because I didn't like it — since I absolutely did — but because I was just too full and too busy drinking some very good wine.

And those reds and whites are really what makes this spot a real find. Owner Scott Kuebler keeps a large and interesting stock and makes buying a better bottle for sipping in-house very affordable by only charging $10 over the retail price. On Tuesdays and Wednesdays even that, which is essentially a corkage fee, is waived. Guests, like shoppers, can choose anything in the store to pair with their food. They're also encouraged to create their own flights: 2-ounce pours of four wines for $15. It's an excellent way to sample some unfamiliar varietals, vintages and vineyards. Not to mention a perfectly delightful way to spend an evening.
Posted by Laura Taxel at 6:30 AM