When Joe and Anthony Russo were seeking an endorsement to become the directors of Captain America: The Winter Soldier, they asked Steven Soderbergh. The Oscar winner, who had produced their Hollywood directorial debut Welcome to Collinwood, had a simple question: “Tell me why you want to do this movie,” Soderbergh recalls.

He wanted to confirm the upstart indie directors he discovered at Slamdance Film Festival in 1997 weren’t just trying to advance their careers by taking on a high-profile property.

“You don’t understand,” they responded. “We have a comic collection worth [$60,000]. We’re obsessed with this stuff. That’s why we want to do it.”
Soderbergh called Marvel Studios president Kevin Feige and told him, “I think they’ll totally deliver for you.”

Marvel believes they have. The two sides have held negotiations for Captain America’s next adventure, too, says Anthony.


“You need to have some street cred in terms of your knowledge,” Soderbergh says. “The fans of that stuff really smell a dilettante.”

Joe’s knowledge has been building for 32 years.

And like with any good origin story, there was a dash of foreshadowing.
“One of the first was 'Marvel Team-Up' with Cap and Falcon, ” Joe remembers. “When we found out we were going to do this movie, it was very resonant for me. It felt like it had come full circle. You laugh because you think of all the money you spent on comic books as a kid actually came to fruition.” 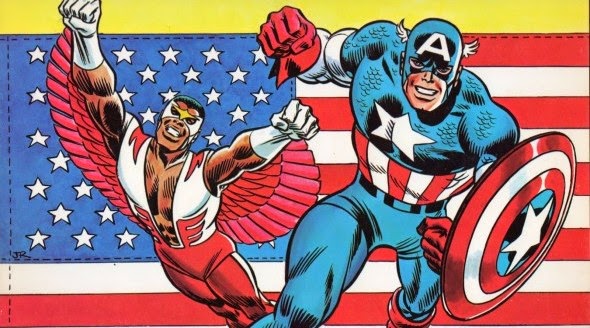 Joe and his uncle would add to their collection a few times a month, digging for rare finds at comic conventions. Most memorably, he struck geek gold at a garage sale when he was 12.

“I bought The Incredible Hulk No. 181 for 25 cents at a garage sale,” Joe says. The issue features the first full appearance of Wolverine. One copy fetched $150,000 at a 2011 auction. “I felt guilty, because at the time it was worth a couple hundred bucks. So I asked her, ‘You know what this is worth?’ ”

“She said ‘I do. I just want to share my collection with kids, so take it.’ ”

Joe was blown away by the gesture, which stuck with him. “One day, I’m going to sell everything in my collection for a quarter at a garage sale to a bunch of kids.”

The Cleveland premiere of Captain America: The Winter Soldier is 6 p.m. tonight at the Cinemark at Valley View. Tickets are required for the event. More information can be found at clevelandfilm.com. The nationwide release is April 4.
Posted by JohnHitch at 4:17 PM