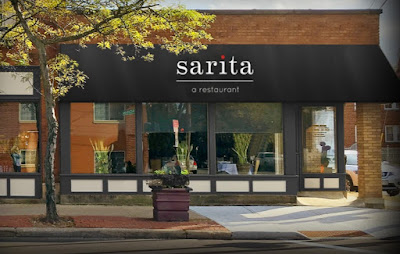 When the venerable Players on Madison closed this October after three decades, longtime executive chef Anthony Romano and business partner Sandy Smith purchased the space for their own concept, a polished and likely soon-to-be-favorite neighborhood spot called Sarita.

It was a move Romano says he'd been contemplating for years, prompted by regular half-serious offers to sell from retiring owner Gary Lucarelli. Sarita opened to the public Saturday, Nov. 14 after an overhaul of the interior space.

Gone is the 1980s-esque wall art, muted wallpaper and neutral chairs and linens. In its place is a bold and minimal black and white concept splashed with red, a tie-in with Sarita's logo (shown above on the restaurant's awning). The space is comfortable and clean, though loud due to the openness of the two distinct dining areas and a painted tin ceiling that, while full of needed character, reflects and amplifies bar chatter.

The menu, divided into "this," "that" and "the other" categories broadly defined as appetizers, small plates and entrees, is expansive with nearly 40 total options with wide appeal, such as crispy, fluffy Navajo fry bread — akin to fried pizza dough — with two kinds of pesto ($4), sweet and savory stuffed dates wrapped in prosciutto ($10) and horseradish-crusted grouper ($29) with chanterelle mushrooms, mashed potatoes and a garlicy vinaigrette.

Serious diners may find this new spot a bit too safe, and regular diners may struggle with the prices for an average night out, but Sarita has at least two standouts going for it.

Firstly, the service is astounding. Most new restaurants can aim only at keeping up with an opening-night crush while struggling to train overwhelmed servers and cooks. Because much of the staff are holdovers from Players on Madison, however, Sarita felt from Day One as if it were already a well-oiled machine (rapid menu changes based on customer feedback notwithstanding nor unwelcome).

Secondly, the olive oil cake ($7). Sure, there's a flourless chocolate cake that will likely sell well because, well, chocolate. But if you take one risk with your visit to Sarita, make it this cake. Citrusy, with a luscious scoop of cinnamon ice cream, just the right amount of crumb and a lingering aftertaste that reminds you the cake is made with olive oil, it was far and away the most impressive dish of the evening.

Posted by Laura Adiletta at 2:57 PM

BlueHost is ultimately the best hosting company for any hosting services you might need.