Weekend In Review: One Year Since Tamir Rice's Death 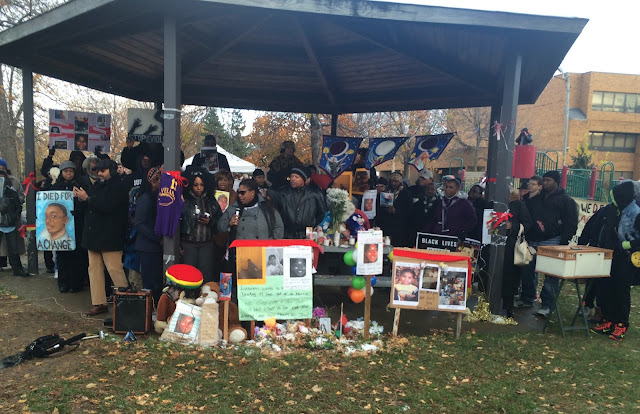 It was a sobering sight as hundreds gathered at the Cudell Recreation Center to mourn the loss of Tamir Rice, a 12-year-old boy shot in the abdomen by Cleveland police officer Timothy Loehmann exactly one year ago on Nov. 22, 2014. As the Rice family gathered under the pavilion, local and national activists filled the grounds of Cudell to show support, holding signs that said "Black Lives Matter" and "Justice For Tamir."

"Words can't describe the pain we felt the day that we lost you," said LaTonya Goldsby, Tamir's cousin, in an open address at the start of the vigil. "This last year we have tried to mend our broken hearts, trying to rebuild from the hole that was left behind."

Tamir's mother, Samaria Rice, thanked everyone for their support. During a moment of silence, 15-year-old Tajai Rice, Tamir's sister, released 12 doves — one for every year Tamir was alive.

"This year has been such a whirlwind for us," said his great aunt Michelle Thomas. "I just want to thank you, Samaria, for sharing him with us like you did. He brought joy into our lives, and she raised Tamir to be the kindest, most helpful, sweetest young man."

In what was the most emotional moment of the event, kids gathered at the front of the pavilion and everyone present joined in unison to sing, "This Little Light of Mine."

It was one of more than 40 events taking place nationwide over the weekend in honor of Tamir's life. Here in Cleveland, the weekend began Saturday morning when more than 70 people – including councilman Matt Zone and several members of the Rice family — came to the Cudell Recreation Center for a project where guests engaged each other in thoughtful conversation as an effort to heal and streamline everyone's intentions for the weekend. There was also an address from Subodh Chandra, Rice family lawyer, at the Martin Luther King Jr. Branch of the Cleveland Public Library continuing to ask for the removal of Cuyahoga County prosecutor Timothy McGinty. And on Saturday evening, a town hall at the Clark-Fulton Public Library, led by Elle Hearns, central regional field coordinator of GetEqual, Goldsby and Michael Nelson, president of the Cleveland chapter of the NAACP alongside local and national activists reminded the public that Tamir's death is not an isolated incident but one that's part of a national systemic problem of racial injustice.

"The fact that a 12-year-old boy was murdered basically by a drive-by [from] the state-funded police shows that this country has no moral conscience when it comes to black folks," said Ryan Brown, a local community organizer. "When they say, 'We don't want another Ferguson,' what I hear is, 'We don't want black folks building community and standing up for themselves.'"

The culmination of the weekend's events takes place at 1 p.m. today when the Rice family, friends and supporters march from the Free Stamp to the Justice Center to hand-deliver more than 200,000 signatures to McGinty's office asking for his removal from Tamir's investigation.