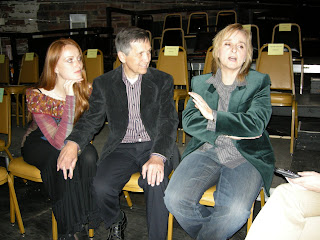 Last night Melissa Etheridge made a short stop at Cleveland’s Public Theatre in order to support the person she considers the “most important member of Congress right now… Dennis Kucinich.”

Speaking to reporters, Etheridge, wearing a crushed velvet green jacket, distressed jeans, and a striped collared shirt, was as earnest as she was warm. “The first time I hear him speak, I thought ‘who is this perfect little man?” she said, in her famous, deep Melissa Etheridge voice. “He sees the world exactly as I see it. He sees the world and what we need to do with perfect clarity. I instantly fell in love with him. [My wife] was like, ‘stop drooling.’”

The singer believes that it is people’s general “fear of sex” that contributes to America’s inability to accept homosexuality. “They think sex itself is bad, and since gays are just having sex for fun, well, that must be the worst of the worst.”

Etheridge, a native Kansan, believes that its Dennis’ Midwestern upbringing that accounts for his accepting nature. “We’re both from the Midwest where there’s an understanding that you work hard, be nice, and play by the rules,” she says. “We get mad when people don’t do that.”

Dennis, for his part, claimed that Etheridge’s crush was, like, totally requited.“Melissa’s got this voice – kind of soul of America type music,” he says. “She’s great.” When pressed to name a favorite Etheridge song, he came up blank and instead starting mumbling about a concert he’d gone to in DC of Etheridge’s, and how great it was that a celebrity of her stature would come to Cleveland.

Etheridge, seeming not to notice this um,” temporary memory block” kept beaming. After the two finished their discussion, they left the stage, little hand in little hand.
Posted by becky meiser at 2:05 PM