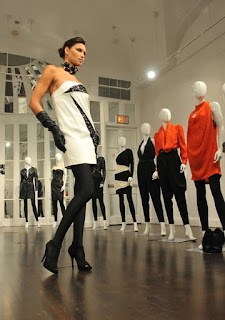 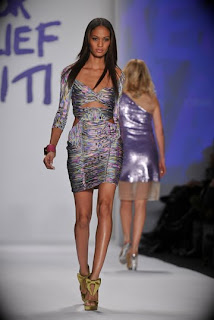 We all have goals – to learn how to parlez francais, to make it through spinning class without hyperventilating, to spend (way) less time playing FarmVille on Facebook, to meet Project Runway’s Tim Gunn –

“One of my big goals this year was to meet Tim Gunn,” says 32-year-old Cuyahoga Falls photographer Jason Noble, who just returned from New York Fashion Week. “I’ve already met Heidi Klum, Michael Kors, Nina Garcia and half of the winners from Project Runway so that was my goal this year. And I got to meet [him] toward the end … so it was kind of exciting for me. I’m a big fan of that show.”

Noble has been hobnobbing with high society for three years since a fashion photographer friend based out of Indianapolis called the Marietta College graduate asking, “Hey, I just got into New York Fashion Week. Can you come help me out?”

So what does an admitted T-shirt-and-jeans type of guy from Northeast Ohio say to the author of A Guide to Quality, Taste and Style and the host of Lifetime’s reality show administering advice to the fashion-impaired?

Seeing the picture Noble took at arm’s length, Gunn kidded, “’Wow! I could be your grandfather!’ So it was kind of cute; he’s funny. And as soon as I got that photo, everyone else tried and he’s like, ‘Nope! I’ve got to go!’ and he disappeared through this door that we never even knew existed,” Noble laughs. “So we kind of joke around that Tim Gunn has his own private little tunnel to Fashion Week.”

During his 10-day stint in NYC Noble also shot Russell Simmons, Liv Tyler, Mena Suvari, John Legend, Adam Lambert… “I’ve got a folder with over a hundred different celebs that I photographed this time out,” he says. And he met Jay Manuel from America’s Next Top Model and Kelly Osbourne, who seemed to be there every day.

“One thing I do when I’m backstage is I try to get models to do devil horns so I tried to get Kelly to do that and she kind of turned her nose up and almost gave me a snooty expression. She’s like, ‘Oh, no, I don’t do that.’ So it was just kind of funny being the daughter of Ozzy Osbourne and whatnot. But then I’m like, ‘Ok, well, can I get a photo?’ And she’s like, ‘Oh yeah, totally!’ So, really nice girl.”

Noble says it’s nearly impossible to attend every show as there are sometimes 10 a day but his favorites were G-Star Raw for its “visually stunning” backgrounds and choreographed performance and Vassilios Kostetsos, whose “entire collection was just amazing. … The use of color, the use of print and a lot of the outfits were on the edgy–slash–risqué side.”

Edgy-slash-risque as in super-short skirts and low-cut tops? “Yeah. All of the above,” he laughs.

Asked if he’ll return to Fashion Week when it hits Lincoln Center in September, Noble replies, “Oh yeah. Definitely.”
For a slideshow of Noble's images from Fashion Week, click here.
Jason is owner of locally based Noble Images Inc. His work can be seen at nobleimages.us.
Posted by Miranda S. Miller at 9:24 AM

So, I'll be honest. I don't usually care about fashion, and I don't watch Project Runway - but this article was REALLY witty and entertaining. It reeled me in!

I'll second what Anonymous said. I'm a sweatpants/t-shirt kinda gal, but the article grabbed my interest so that I wanted to read what was going on, even though I don't give a hoot about fashion.

I concur with the other posters - fashion is not my favorite thing, but this is a very well written piece! For the first time in my life, I'm going to Google Tim Gunn! It's nice to hear a story about a local guy having such an exciting cultural experience.

Nicely done article -- deftly avoided the normal foaming and simpering about fashion. Terrific photos. I can see why he was asked to help.

Great piece, and nicely punned, on Noble's visit to NYC Fashion Week. Provides a good glimpse of what this local Noble is doing (which is better than Face Book I would think) while also giving us a taste through Noble's lens of what actually goes on at a "fashion event." Noble approaches his targets with zeal. Who else on earth would attempt to get Kelly Ozbourne to do the horns thing? The photo of her resonates Ozzy. Well thought-out and well written.

Fun and witty. Noble's adventures were entertaining and his comments ditto. Well told!

All Lacquered Up said...

I'm a local Clevelander and I was at Fashion Week as well covering backstage beauty for my blog. I wonder if I saw him at any shows.

There was actually a few of us representing the CLE. A local manicurist was working on quite a few shows, her brother was photographing backstage and we met a PR girl originally from Mentor (my hometown). Talk about a small world.

Loved the article! It's very cool to read about Clevelanders involved in such an international event. I do love fashion, and I love Project Runway, but most of all, I love my hometown.

I really enjoyed this inside glimpse of the "fashion world". This article is well written and most importantly kept the tone upbeat and humorous which kept me interested in seeing it through to the end as well as elicited more than a few cackles along the way. Nice job!!