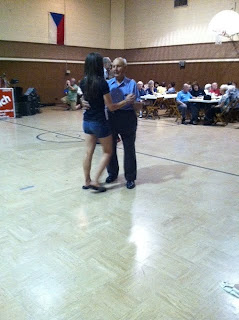 Less than two minutes after we arrived at the annual Cesky Den, or to us, Czech Day, he had us dancing. One-by-one he whisked both of us into a spirited polka. Amidst other dancing couples, the faint smell of sauerkraut and the folksy music of the Fred Ziwich Band, we tried to keep up with the man. Let’s just say several toes were stepped on.

You wouldn’t expect more than some squirrels and old houses tucked in the woods of Auburn Township. And for the most part, you’d be right. Yet last Sunday, hundreds of Czechs gathered at the DTJ ("Delnicke Telocvicne Jednoty" or "Workers' Gymnastic Union") Farm for Cesky Den.

A polka band complete with an accordion and wooden claves stood coolly playing at the front of the room as elderly couples twirled around center court. At tables on either side, people ate foods ranging from goulash to tripe soup.

We decided to try the goulash dinner, for $11, served over dumplings, allowing for the savory gravy to soak into the bread. Dinner was topped off with kolacky, a doughy pastry. We tried the ones with apple and raspberry filling. It was like visiting a Czech grandmother in her hometown and eating the meal she cooked before sending us to polka again. We wanted more kolacky for the road, but within 20 minutes, most of the giant trays were empty.

“There is a big Czech community in Cleveland; there always has been,” said Deborah Gehring, who’d just come from the dance floor. (The Czech population is one of the city’s oldest and largest, according to the Encyclopedia of Cleveland History, with 37,000 people in the 1990s.) Both of Gehring’s parents are from the former Czechoslovakia, and she attended Czech school for six years: two hours after her normal school day, twice a week, to learn Czech songs, dances, history and the language.

The makeshift bar was still crowded as the songs and dancing were winding down at 6 p.m. As we were buying a Cesky Den T-shirt, we ran into a familiar face: Frank again, requesting a final dance. We happily obliged and were pleasantly surprised by his vivacity, though being of extremely slight Eastern European heritage, both of us still had a hard time keeping the pace.

A few miles down the road, we decided we are definitely coming back next year. — Allison Gray & Katie Naymon
Posted by Allison Gray at 11:18 AM