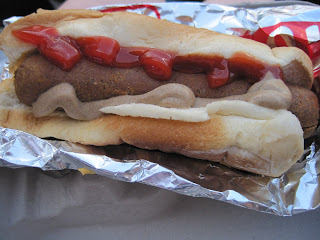 Why should carnivores have all the fun? Faced with classic baseball fare, there’s not a lot that vegetarians can stomach. Enter Field Roast Grain Meat Co.

“The veggie dog category is pretty old in terms of being established in the industry,” says Field Roast’s president, David Lee. “Those products were very kind of pasty, heavily emulsified, and they really, I thought, gave vegetarian products a bad name.”

Field Roast makes its veggie dogs from grains, tomato paste, paprika and fresh onion and garlic. Thanks to the tomato paste and paprika, the dog has a reddish-orange tint similar to a flavored kielbasa. It costs $9.50, or 75 cents more than a traditional hot dog.

Lee started Field Roast 15 years ago to provide meatless products for vegetarians and meat-eaters alike. Its vegan Italian sausage is the hot dog alternative at the Happy Dog in Cleveland’s Detroit-Shoreway neighborhood.

“There are a lot of people out here who are veggie-friendly, not necessarily vegetarian, but who enjoy vegetarian products and know it’s a healthy way to eat,” says Lee.

Instead of fueling up before games, Cleveland vegetarians can come hungry to Progressive Field.

“I never knew there were any veggie options here [at the stadium], so I would just drink beer and eat pretzels,” says Cody Pike, 29, from Euclid. He’s a volunteer for Veggie Happy, an advocacy group that encourages baseball stadiums to offer vegetarian and vegan food.

“I think it’s very impressive that we are included with San Francisco and Seattle as the only three [offering Field Roast’s veggie dogs],” says Pike, who is raising his 8-month-old son vegan. “It’s a pat on the back that we’re paying attention.”
Posted by Lauren McGrath at 5:39 PM

Veggie Happy is proud to have played a part in opening the door to Field Roast frankfurters at Progressive Field. They are doing great at AT&T Park and Safeco Field. The fact is they're really popular with meat eaters and vegetarians alike, making them a win/win menu option. Go one step further and offer customized veggie frankfurters, as Safeco Field already does, and you'll score a home run!