King of the (Bar Food) Jungle

Motivated by a combination of three things – proximity, hunger, and the buzz about this unusual spot – four of us decided to do a spontaneous drop-in at the Lion on Lorain.

Here’s what we knew: it was on the west side, (127th and Lorain Road), and so were we; it was open (on a Sunday); we craved bar food and had heard that what they did here was way better than average; we didn’t have to dress up and wouldn’t spend a lot of money which was exactly the kind of evening out this group had in mind. What we found was even better than what we expected and guaranteed that we’d all be returning, soon and often.

Jason Wagner took over the former shot and beer venue after it had been shuttered for four years and reopened it last July. The place defies categories and cannot be easily pigeonholed. Is it a watering hole for sports fans, a bikers welcome hang out, a neighborhood tavern or a gastropub? It is no one of these but a bit of all of them, a surprising and welcoming hybrid with a nothing-fancy look, paper lined plastic baskets instead of china, and a kick ass menu of stuffed and stacked sandwiches, inventive burgers and dogs, tacos, and fried potatoes at prices that were astonishing for the quality and quantity. 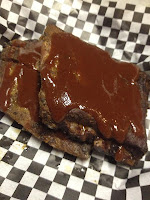 We started off with some trikes, three smoked rib bones and sauce, and a basket of onion rings to share, both delicious, plus beers— the selection’s outstanding and full of interesting craft brews. We agonized over what versions of meat-in-bread to order because just about everyone was appealing. Final choices were:
- The Mississippi, a smoked and barbequed pork panini with cheese sauce and a fried egg
-The Irishman, a burger with smoked corned beef, crispy potato, cole slaw and Swiss cheese
-The Cuban, slow roasted pork loin, ham Swiss, pickles, bacon, house mustard
-The West Park, the corned beef and crispy potato with jalapeno slaw, Swiss, and fried egg 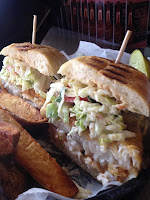 These are mostly big, man vs. food sized monsters requiring two hands and some mouth stretching to get a full top to bottom bite. And they are so so good. Wagner deserves the credit for coming up with these crazy combos. But they’re even better because he recently partnered up with Walter Hyde and Scott Slagle, the guys from Fat Casual BBQ in Macedonia(much as management at ROC Bar did- I wrote about that in May. These two do the slow cooking and smoking out there and haul their most excellent meat into town. Hyde’s two sons, Ryan and Devin are now manning the Lion kitchen so the two independent businesses have become, according to Wagner, one big and very happy family.

I’d been told the sweet potato tots were not to be missed. Sadly, they were out of them by the time we arrived. I was planning to get them next time but Jason told me they’ll likely be gone. “When we started with that idea nobody around here was doing anything like them. Now they’re everywhere so I have to dream up something really new and different.” No doubt he will.

Update. Just found out three things: The Lion's now serving Sunday brunch; they're throwing themselves a one year anniversary party, with live music, July 19; and Wagner just got word that an executive producer with the Travel Channel is planning to stop by in August.
Posted by Laura Taxel at 6:00 AM