"Doomsday Book" brings a dose of weird to CIFF 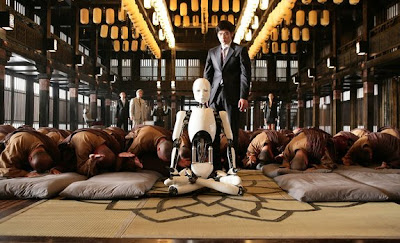 Doomsday Book is as entrancing as it is strange. The 2012 sci-fi film from South Korea contains three chapters by two different directors — all in some way dealing with an apocalypse of sorts, be it the rise of artificial intelligence, the fall of man to a zombielike disease or an enormous asteroid accidentally sent to destroy Earth.

The standout of the 120-minute film is Kim Jee-woon's "Heavenly Creature," in which a technician is called to a Buddhist monastery to investigate whether a robot there has achieved enlightenment. Is the robot malfunctioning or is something else going on? Those at the monastery are fascinated by the unusual development, but the company that owns the robot — an organization that has both the right and responsibility to investigate such events — wonders whether the machine should be destroyed. The thought-provoking and sometimes haunting chapter examines the role intelligent machines play in a modern society and the consequences their existence has on our own.

That story is bookended by Yim Pil-sung's "Brave New World" and "Happy Birthday." The former is a love story-turned-zombie-apocalypse-turned-love-story. The latter is a Twilight Zone-esque tale in which a young girl trying to buy a billiard ball online accidentally orders the planet's destruction. Both are fun, but "Heavenly Creature" is the one that'll stick with you.