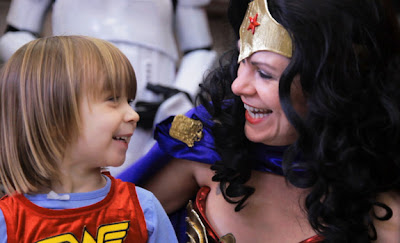 Hollywood likes to remind us of the male superheroes that shaped our culture: Batman, Spiderman and Superman to name a few, but what about the female superheroes? Why hasn’t a superhero summer blockbuster featured a female character at the helm?

Wonder Women! The Untold Story of American Superheroines delves into that question and many more in its short but fulfilling 62 minutes. It traces how Wonder Woman’s evolution — from her '40s debut as a brazen, powerhouse to her '50s turn as a passive, lovestruck wife — reflects the changing roles of women in society.

Earnest interviews with strong women such as Gloria Steinem and Lynda Carter shed light on how women have won and lost over the years as our image and purpose changed. The film presents examples of modern-day versions of superheroines like Buffy the Vampire Slayer and Lara Croft, but it also addresses the void of women who exude strength, power and prominence. That's not to say the film isn't hopeful. Scenes at youth workshops and interviews with children remind us that, with each generation, women more closely associate themselves with the altruistic, powerful version of independence that Wonder Woman embodies.

The Cleveland International Film Festival runs through April 14. To browse the schedule, visit clevelandfilm.org.
Posted by Kelly Petryszyn at 3:00 PM

Hey i was wondering where you got that picture of the little kid and Wonder Woman?