Cream of the Crop 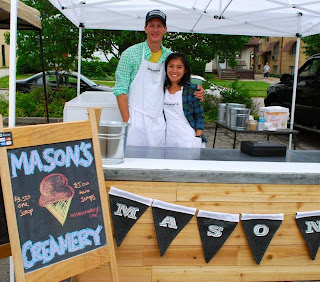 July is National Ice Cream Month, so this seems like an auspicious moment to post my rave about  Mason's Creamery and the two utterly likable people behind it. Jesse Mason and Helen Qin just started showing up at farmers markets and other local public gatherings to sell scoops of their small batch ice creams in May. I had my first taste last month. I tried Vietnamese Coffee, which they cleverly serve with a drizzle of condensed milk, and knew that I'd come upon something special.

The young couple relocated here from Los Angeles, and the move was a homecoming for Jesse. The timing was auspicious. The Cleveland Culinary Launch & Kitchen which I wrote about in May, had recently opened, providing a licensed space where Jesse, who's skill set also includes graphic design and animation, could make their ice creams, using organic milk and cream, and local ingredients like eggs and seasonal fruits. He's in charge of production and Helen is the official taster, as well as social media manager and encourager-in-chief.

Deciding what kind of ice cream they want to offer is a joint project. And they're definitely on the cutting edge and coloring outside the lines when it comes to flavors, their latest include Nutella, tangerine and mimosa. I was wowed by Raspberry Lambic, one of the regular vegan versions. "Life is too short to stop at vanilla and chocolate," says Helen. 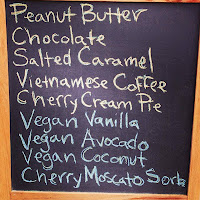 "We have those, but we want people to live a little, experiment too," Jesse adds. According to my food world news feeds what they're doing reflects a trend sweeping the country for getting all funky and fearless with ice cream. Andrew Knowlton of Bon Appetit has observed that people are putting in whatever they can think of, no matter how crazy or oddball it sounds, from avocado to foie gras.

Ideas come from many sources:  Helen's Chinese heritage, their years in LA's vibrant international culinary scene, travels in Columbia and Italy, plus stuff they eat, like and read, and suggestions from customers and  Facebook fans.  A recent tweet of mine commenting on how messy it was to peel fresh mangoes prompted the creation of mango lime chili. It was a knockout combination. The tastes really pop, thanks to the spice —  almost undetectable except for a kind of extra brightness — and because they use less fat, 9 to 10 percent compared to the typical 14 percent (yet, you still get a rich creamy consistency). 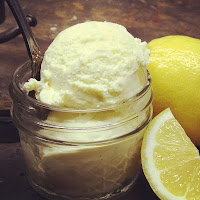 This week  Mason's is debuting a really off-the-wall  flavor: chicken and waffles. It starts with bits of crispy fried bird folded into batter. Jesse, who told me he tries to maintain strict control over how much of his own product he consumes, confessed that he couldn't help himself and overindulged in a great big bowl of it. I can't wait to give it a try. Find it today at Walnut Wednesday food truck Chow Down and Saturday during the Cleveland Flea, this Saturday, July 13, at Sterle's.

Mason's Creamery has no permanent storefront home ... yet. But the pair are looking at different neighborhoods and properties. Meanwhile, they're living the carny life, moving from place to place every day, toting around the freezer, setting up their tent and table, and making people happy wherever they go.

Thank you so much, Laura! We love the post, thank you for telling our story (and being the catalyst for the mango chili lime ice cream)!

We currently have tons of open positions for social media managers.

eToro is the #1 forex trading platform for newbie and full-time traders.