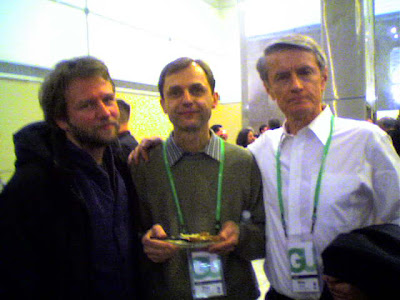 The man on the right, Mike Cram, is brilliant. After endless failed inventions, he thought of one brilliant one. A small thing. But you probably know it. And you probably like it. Probably especially if you're a guy.

Then Mike decided to write a screenplay about himself and his crazy business partner. The guy in the center, Greg Goodell, wrote a book about making movies, and Mike read it and liked it and got Greg to executive-produce his movie. The guy on the left, Dallas Roberts, plays Mike in the movie, Lightbulb, which was tonight's opening-night film at the Cleveland International Film Festival.

I won't tell you what Mike's invention was, because that would spoil the movie's surprise, and it'd just a be a movie about _____, not a fun movie full of likable characters, a buddy movie about two friends who are great and awful for each other, and a movie about a guy whose wife knows his faults and can't stand them anymore. And if Lightbulb finds a distributor, and the movie comes back to Cleveland, you should go see it.

But if you want to know what the invention is -- spoiler alert! -- click here.
Posted by Erick Trickey at 11:01 PM