Stories of People and Produce

Maury Feren is not your typical 94 year old. He’s as engaged, busy, and productive as when I first met him. That was 1993 and I interviewed him for a story that appeared in the Plain Dealer Sunday Magazine (remember when the PD had a real Sunday mag?). I admired his energy then, and I am even more in awe of it now. The guy’s had multiple careers and been successful at all of them. He spent thirty years as a wholesale produce merchant, started and ran a fruit basket company, published a guide to fruits and vegetables, and appeared regularly on radio and TV, eventually hosting his own shows. Not content to call it a day, Feren, nicknamed Cleveland’s Produce King, just self-published his autobiography.

Called Wheeling and Dealing in My World, (Windjammer Adventure Publishing, $15.95) it is the classic American story of a self-made man and a true Cleveland tale. He talks about neighborhood life as the child of immigrant parents in the early years of the 20th century, the Depression, and his service in World War II. It’s sure to evoke memories for others who grew up here around the same time and those who like him went off to fight in Europe. But the heart of the book is the collection of behind the scene stories from the produce business and the characters that populated the Northeast Ohio Food Terminal where he worked. It was a tough world filled with rough men willing to sweat- and fight- for every dollar. The last section of the book reprises his anise to watercress primer with tips on selecting, storing, and using fresh fruits, vegetables and herbs. 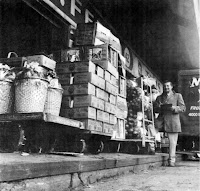 The book is intensely personal and idiosyncratic; a sort of extended conversation with the man and the voice is pure Feren. What he’s written is a memory collection, a love note to his wife, and a long thanks to mentors, friends, and all who helped him along the way. The author will be signing copies of his book this Sunday, May 9 at Miles Farmer’s Market from noon to 4 PM, and on Tuesday, May 11, at Joseph-Beth Booksellers, at 7 PM.
Posted by Laura Taxel at 8:00 AM