After two decades on Buckeye Road, Lucy’s Sweet Surrender, the Hungarian bakery that had been at that address since 1950’s, has moved to bigger and better digs on Chagrin Boulevard. The new place is the former Chandler and Rudd, a gourmet market that closed in 2009 after 145 years in business. The two iconic food spots with long histories and deep local roots are a good match up. Lucy’s officially re-opened May 16. The renovations took much longer than expected, as these things usually do. Now that the hassles and headaches are finally behind them Michael and Marika Feignbaum are free to enjoy the change of scene.

Besides being in a better, and hopefully much safer neighborhood- the couple was robbed and mugged multiple times- they have much more space for making the wonderful Old World style breads, cakes and pastries that are their stock in trade. Customers can see them at work and even shout out a greeting while picking up strips of strudel or a luscious multi-layered torte. The vintage display case from the old store has been positioned in the center of the large open room. The workspace is right behind it.
photo of Michael and Marika courtesy of Susie Sharp

There are a few tables and chairs inside, and a couple more outside, for when you want to sit down and eat a pogacsa (a flaky biscuit with bits of bacon ) immediately rather than wait to bring the bagful home, or if you just feel like grabbing a cold drink from the cooler and kibitzing with whoever else is hanging around. 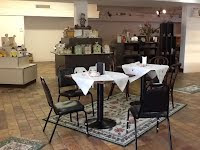 There could be more seating to come. They put in a kitchen, separate from the baking operation, and hope to find a partner willing to work with them to create a true café. A collection of cookie jars adds a sweet homey touch and three photos of Michael’s sweet creations by my husband Barney Taxel grace the walls. Take a moment to inhale deeply- the yeasty smelling air is a treat.

Michael’s kneading a batch of Jewish rye when I stop in for a first visit. I get the penny-tour: the new Vulcan stove, shelves filled with containers of golden raisins, poppy seeds, nuts, and 50-bags of flour. He talks non-stop, happier than I’ve seen him in a long time. “It was hard to say goodbye to the old place,” he admits. “But this move means a new life for Lucy’s and a new chapter for us.”

Finding your way in can be tricky. There’s no entrance on the side facing Chagrin Boulevard at Warrensville despite the big sign on what appears to be the front of the building. Take Lomand, a side street, and go around back, where there’s also a parking lot. Address is 20314 Chagrin Blvd, Shaker Heights (note: Lucy's website still has old one up), 216-752-0828.
Posted by Laura Taxel at 6:00 AM

That's Lomond, not Lomand, for those who don't know. Lomond is the first light west of the big annoying intersection of Chagrin, Warrensville, Van Aken, and Northfield. Turn left at that light and left again at the first available place. If you get to the next street, you've gone too far.

we just changed the address on the main website www.lucyssweetsurrender.com
we also have a great page on facebook linked from the website there are many great pictures of our move, our products and many fans who post from all over the USA. thanks laura and barney two friends for life.
michael@lucys