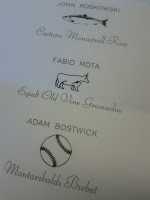 As last night's Dinner in the Dark at Washington Place Bistro was about to round third and head for home, everyone at our table was wondering what Adam Bostwick's baseball-themed dessert was all about.

The monthly dinner, which benefits a different local charity each time it's staged, holds lots of secrets. Diners don't know who'll be cooking until they arrive or exactly what's on the menu until each course shows up at their table. The brainchild of chefs Jeff Jarrett (Amp 150), Brian Okin (most recently of Fountain) and Ellis Cooley is a lot of fun, especially as one attempts to decipher the clues on the evening's menu card.

The cow under Fabio Mota's name (Club Isabella) was self-explanatory, as was the fish under that of John Roskowksi (Washington Place Bistro). (Fair warning: It's unwise to even guess what the exact preparation will be, because you will be wrong. The beauty of Dinner in the Dark is the chefs get to stretch out and offer creations that are often vast departures from the cuisine for which they're known). But still we wondered: What was up with that baseball? 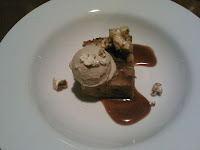 Yes, please. I wasn't embarrassed to be the first at my table finished.

And, yes, the Stadium Mustard ice cream works — if you like Cleveland's famous condiment, that is. (And, yes, we know Bertman Ballpark Mustard is what's served at Progressive Field, but we're going to allow for a little artistic license.)

Bostwick was most recently a chef at the now-shuttered Melange. I'm just putting this out there to the universe: I'd love to see this on someone's summer menu ... soon.

Here was the rest of the evening's menu that led up to Bostwick's bases-clearing creation:

Jeff Jarrett announced at the end of the night that the next Dinner in the Dark is set for June 11 at Fat Casual BBQ in Macedonia and promised some "twists and turns" with this one. Visit the website for more information.

These 3 researches from big medical magazines are sure to turn the conventional nutrition world upside down!