Meat Up in the Flats 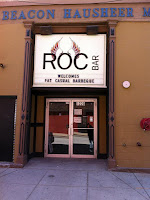 I haven’t found myself on the East Bank of the Flats in quite a while. But the promise of some amazing food had me driving down the steep hill that is W. St. Clair and onto Old River Road last Wednesday afternoon. Roc Bar, a six year old music venue and as of now the only operating entertainment venue on this stretch, has partnered with the Walter Hyde and Scott Slagle, the guys behind Fat Casual BBQ out in Macedonia, and from now until the fall you can reinvent lunch and dinner with some seriously delicious smoked meats and poultry.

I’d been hearing about the great food these two were making for the past year and am embarrassed to admit I just hadn’t set aside time to do the 46 mile round trip yet. So I was pretty pleased when I learned that I didn’t have to. This is a trial run to gauge interest. If the response is good, the arrangement could become permanent.

Roc Bar doesn’t have much of a kitchen. Put one cook in it and the little room's crowded. Equipment is limited, though Walter does hope to fire-up an outdoor grill during the summer. So for now at least only a selection of items from the Macedonia menu are available. The beef, pork, and chicken get their hard wood smoke on out there and are driven in, along with all the house made sauces and sides. Final prep is done to order.

Seating inside and out is limited. They expect much of the food will be ordered for

take-out. But when I showed up the sun was shining, the temperature was mild, and my spot on the deck was a perfect place for a finger licking, sauce dripping, three napkin feast. My tour d’taste, courtesy of Walter, included a slab of ribs, slices of Texas brisket, a pile of Carolina style vinegared pulled pork, and samples of smoked chicken salad, mac & cheese, and chili. It was all fantastic, the spicing was spot on. These dishes were clearly the work of people who pursue flavor with a passion and know a thing or two about what it takes the rule the pit.

The presentation is uber casual, featuring disposable utensils and dishware. But what’s being served is 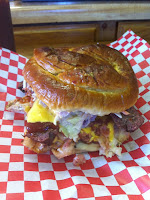 prepared with all the care and finesse of an upscale restaurant. So I thought it was funny when two young man-you know the type, t-shirts, baseball caps on backwards, shades at the back of neck- at the next table weighed in loudly with their personal “review.” Taking in the scene-the river view, blue sky, and swooping seagulls- and the frosty beers and huge sandwiches in front of them, one says to the other, “Dude, now this is what I call FINE dining.” His buddy, who already had his mouth wrapped around that loaded bun, could only nod in agreement.
Posted by Laura Taxel at 6:00 AM