Reality tv has given us “Wife Swap” and “Trading Spouses.” These shows hold no attraction for me, but there is an upcoming exchange that has me all excited. On Monday and Tuesday nights, Oct 26 and 27, gin slingers from Chicago’s Bar DeVille are taking over at The Velvet Tango Room, Cleveland’s shrine to fine spirits. 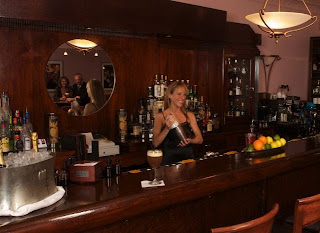 They’ll be shaking up some signature cocktails to give us locals a taste of what their guests get back home. I’ve heard they do one with chartreuse called the Songbird, named Best New Cocktail this year by the Chicago Reader. They’ll also give us their take on classics like the Moscow Mule and Dark and Stormy that are VTR staples, (“They take a more interpretative approach than we do,” says Paulius Nasvytis, the man behind the Velvet), and will create a special drink to commemorate the event. Media folk like me get pre-sips at a private reception first. Pouring for the public starts at 8 PM.
Carol makes it happen at the VTR 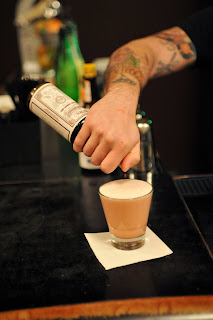 Next month, on November 9 and 10, VTR bartenders will do the same, plying the liquid arts for the Windy City crowd. No doubt they’ll wow them with a combination of finesse and flair. But this is no mix off. There’s nothing competitive about the switch and everybody wins, especially those who belly up to the bar at either location to buy one of these carefully crafted libations.
The DeVille Pour
The two places, I’m told, share a philosophy – and details of décor- that makes the switch seamless and natural. Both endeavor to return cocktails- and those who enjoy them- to a better time, before shortcuts and cheap imitations became the norm. Every drink embodies a sense of elegance and class, the best ingredients handled with the best intentions. If the bartenders from Chicago are indeed motivated by the same quest for perfection as those I know and admire at the VTR, then the experience they’re bringing to Cleveland promises to be deliciously memorable.
Posted by Laura Taxel at 8:00 AM