Imagine walking into a party alone. There's nobody you know. That's how a Dinner With Strangers begins but the awkwardness doesn’t last more than 30 seconds thanks to your host Danielle DeBoe. She’s got a special talent for making everyone feel comfortable and kick starting chit chat. That’s part of the magic formula that’s turning her bright idea- bring together small groups of people who’ve never met to share food and conversation- into a runaway success. She held the first Dinner in March, and told me she’s received over 400 requests since then to get on her guest lists which are selected from among all who “apply” for an invite.

The multi-course meals, held in different locations around town, are a creative approach to networking and socializing. Modeled on something she experienced in Paris, they’re a contemporary riff on the "salons" of the past. Think of this as facebooking in 3-d.

DeBoe is a big civic booster and proprietor of Room Service, an eclectic furniture, housewares, and art/craft boutique. We included her among Cleveland Magazine's 2010 Most Interesting People. These unconventional soirees are her way of creating an expanded sense of community and adding more coolness to Cleveland . Couples are welcome but the evenings are perfect for singles. Going solo is not required but is encouraged. Groups of friends who want to hang together need not apply. 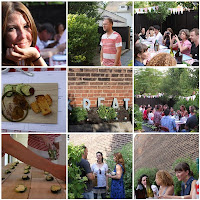 I attended a Dinner With Strangers on a Sunday night in July and had a wonderful time. I started out sitting across from an architect and his wife, the woman who created City Prowl, and between an auctioneer and her partner. Mid-meal, Deboe had those of us with trays at our place settings pick them up and move to new spots. This put me beside a plumber who grows vegetables and herbs in his loft apartment. On the other side of the table was a lawyer, with a sideline as a food blogger, who told me that she agreed to end a long distance romance and move here only after her sweetheart, now her husband, gave her a copy of my book Cleveland Ethnic Eats. Apparently it helped convince her that this was a city with its own special charms. By the time the event, held in the walled garden of Chartreuse, a graphic design studio on the west side, was over I had a pocket full of business cards, had done a bit of contact matchmaking, passing along some names and information, and had an exchange that could lead to more of the same with the potential to blossom into a friendship.

Food is the centerpiece at these gatherings. Every dinner has a theme, echoed in decorations done by DeBoe, and the menu is always unconventional and full of surprises. It provides the group with a common and bonding experience that prompts interaction. Cost is are kept to an affordable $30 and is BYOB to share.

My meal was all about BBQ but there were no burgers or potato salad in sight. Instead we dined on pulled bourbon braised beef cheek with watermelon and sour apple tartare, sweet potato and radish slaw; three kinds of pickles presented with green tomato jam, pig trotter rillettes, duck chicharron + hot sauce, and tiny cornbread crackers; candy onion beets with rootbeer BBQ sauce, beet greens and jowl bacon. For dessert there was peaches and cream mousse on blackberry lemon verbena scented pie crust, a sun tea roll up, shaved caramelized white chocolate, and corn coulis. All was the work of Ryan Santos, a self-taught chef with a very individual and quirky approach. Since he doesn’t have a restaurant to call his own, this is the only way to taste what he can do, and the unconventional setting, more intimate and friendly than the kind of upscale dining room where this type of stuff is normally served, adds a dash of playfulness and adventure.

DeBoe and Santos are doing Dinner With Strangers monthly. There’s one scheduled for August 29th at the Sculpture Center. If there’s no space for you be sure to become a FB friend so you can keep up-to-date on what the pair is planning.
Posted by Laura Taxel at 8:00 AM

It was nice to finally meet and dine with you in person!

sounds like a fun idea! I attended a dinner (at Essencha, Cincinnati) prepared by Ryan, and it was eclectic and delicious! definitely an unforgettable experience.