A Dad's view of the Jonas Brothers concert 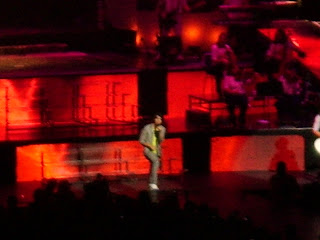 Yes, I went to the Jonas Brothers concert last night at Blossom. (Embarrassingly enough, this is only the third concert I've ever attended. The other two were Donnie Iris & the Cruisers back in high school, and Live maybe 10 years ago. Let's just say, I'm not musically inclined.)

Surprisingly, it was a good time, maybe because my girls (8 and 6) had so much fun. They're not Jonas obsessed like most of the crowd (they're a little more in the Naked Brothers Band demographic), but knew most of the words and screamed with the best of 'em. The collective squeal when the JoBros hit the stage was enough to raise the boy-band dead (guess that's how New Kids on the Block will play The Q on Oct. 3).

Here are some of my favorite observations from the concert:
JoBros rule. <3
(Or something like that.)
Posted by Steve Gleydura at 11:48 AM